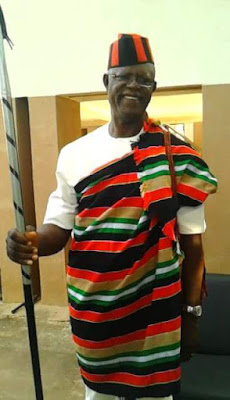 I am writing this article with total displeasure and despair as I and other political observers and commentators of this present administration witnessed the highest form of political brigandage and a conscious effort of political detractors to destroy, tarnish and rubbish image of the executive governor of Benue state H E Chief Engr Benson Abounu.

My attention has been drawn to a publication that has been making rounds on all social media platforms credited to online newspaper site  published on the 31st August 2016.
The content of this article is mind blowing and irrational as it contains wild, false, unheard, wicked and malicious allegations against our God fearing and selfless leader of engaging in cultistism, political intimidation and pedophilia.

The sponsors and author of this article has decided to embark on a wild goose chase by trying hard to make our great leader  an appendage of Hon Okefe’s political misfortune by accusing the deputy governor of been behind the plot to impeach the embattled deputy speaker of the Benue house of assembly Hon Okefe.
They went further to accuse the deputy governor of trying to force okefe into occult practice and other BLAH BLAH BLAH the writer and his sponsors choose to use.

My people, it is no longer news that Okefe is the architect of his own misfortune as he Okefe decided to turn into a government car contactor over night. It is not enough that he Okefe was the one who awarded the contract, he still went further to execute the contract and of course shot changed his house colleges by 5million naira each.

This singular corrupt act exhibited by the deputy speaker was exposed by well meaning citizens of this state and after decisive investigations by the anti graft agency, the Okefegate conspiracy was exposed to all Benue indigenes and we all saw Hon Okefe for who he really was, a corrupt legislature who was not fit to lead the Benue state assembly. as it is observed in most modern democracies, once a public officer has been accused of corruption he/ she is scrutinized, the honorable step and decision expected of the public office holder is to resign and clear his name if innocent, but in Africa and Nigeria to be precise, what we witness are ‘Sit Tight Syndrome” been exhibited by our public office holders.

The recent corruption scandal that rocked the Benue house assembly exposed corruption, and when he okefe tried to run to the Executive for political cover, he was disappointed as the Otorm/Abounu administration, since coming into office have shown zero tolerance to corruption.

Now I ask how then does a car contract in the house of assembly concern a deputy governor? Is he a car dealer? Or a car contractor?
One would wonder what the sponsors of this article hope to archive, we have witnessed several attempts by the opposition, food is ready politicians and now disgruntled elements within the APC to smear the name of our leader Chief Abounu in the mud but the more they try, the more he excels and soar greater unequivocal heights. Engr Benson’s track records and very intimidating political odyssey is there for everybody to see.

To me this is a deliberate act of slander and a malicious way to undermine the leadership, power, and authority of the Lion of Zone C politics, his explicable Excellency Chief Benson Abounu.

Well I am sure Benue people know better than to belief this total lies and falsehood been spread around by monsters in our state so as to distract this government from delivering the dividends of democracy.

Once again I say to them enemies of progress, you have failed, the whole Idoma community knows Engr Chief Benson to be a devoted Methodist member and an active elder in the church. At this point I must say to the authors of this publication to be careful and desist from making stupid and wild accusations based on hearsays.
We Benue indigenes are not stupid and primitive to fall for such nonsense as we are the electorates and we know who we voted to lead us.

I call on our leader and deputy governor to please unleash his legal team on these false poitical prophets and sue for Libel, assassination of character and spread of false propaganda without proper investigation.

This has to stop, just because the deputy governor is calm and avoids unnecessary issues, does not mean jobless people will continue to carry false stories up and down with the aim of spoiling the image of this political Iroko. Enough is enough; we all must join hand in condemning this continuous act of slander.
Long Live Benue state,
Long Live Nigeria,
Long Live the Black Race.