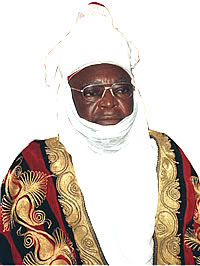 Report reaching us from Otukpo indicates that the paramount ruler of the Idoma Kingdom, Ochi’ Idoma IV, HRH, Agabidu Elias Ekoyi Obekpa has suspended the second Class chief for the Agatu local government Traditional Council Chiefs, Godwin Onah.
The Och’ Idoma IV and the Idoma Area Traditional Council (IATC) did not give any specific reason for the action, but sources said the suspension was not unconnected with the Fulani/Tiv and Agatu crises.
The letter signed by the secretary to the Idoma Area Traditional Council (IATC), Mr. Joseph O. Adah, merely said, “the council took this decision at its sitting of May 28, 2013, while reacting to the recent crisis in Agatu local government area.”
Sources close to the Agatu local Government Traditional Council who doesn’t want his name mentioned said the suspension was a fallout of the “planned” Fulani attacks, adding: “Let me tell you, they (IATC) wanted us to allow the Fulani to attack the Tiv people using our axis and we said no.
“That is why if you look at the suspension, they did not state any reason. Instead they said they have appointed a five-man committee to look into the remote and immediate causes of the crisis. I say that is putting the cart before the horse.”
The suspension letter stated in part that “the Ad’Apa, Chief John Antenyi, is to oversee the affairs of Agatu local government area, traditionally,” while “the beaded Clan Head of Enogaye, Chief Sunday Oyi’gatu” as acting “Acting District Head of Agatu District.”
According to the source, the IATC is only using the Agatu crisis as a smoke screen.
“It is only God that will help us. When they want to discuss some of these issues they used to ensure that our traditional ruler is not present, but that day I don’t know what happened,” the source said.
At the time of filing this report, the Special Adviser to the Benue state Governor, Bureau of Local Government and Chieftaincy Affairs, Chief Solomon Wombo, could not be reached for comments.
Previous Post