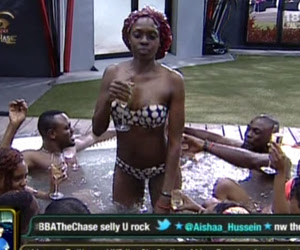 Today, I want to move away from politics for our poli-thief-cians. My attention was drawn to the ongoing TV reality (immorality?) show, Big Brother Africa: The-Chase by one of my senior colleagues.
I must confess I am not a regular viewer of that particular reality show; in fact, since its conception, I have never liked it – with reasons. Aside the votes coming in from diversified audience, can someone please enlighten me as to the criteria by which the eventual winner of the BBA Game: The Chase would emerge? Confused face!

No doubt, the show preaches unity amongst African countries. It brings together people from different countries and culture and promotes the exchange of ideas. It also aids inter-personal relationship among the contestants. Another good side to it is the elevation of the eventual winner from a low-income, or sometimes, a poverty-stricken situation to a better life.
From a more critical perspective, the BBA has really gotten into the heads of our youths. All the juicy details of what happens in the house especially in the wee hours are never missed by many young boys and girls. They can correctly tell you whose boobs were smooched, which pair stole some kissing moments, as well as the various colors of underwears displayed in the last 24 hours and who had the “biggest” JT bulge in the house.
It is good to know that Nigeria had won in three consecutive episodes from- Chuwang Pam Kelvin in 2009, to Uti Nwachuckwu in 2010 and to ‘breastfull’ Karen Igho in 2011. However, I see those three straight wins in two different perspectives. First, it is good to know that we have the largest market and also that we didn’t fail our flag bearers – by our incredible votes, we did boost their winning chances.
On the other hand, we all know the goings-on in the house and the shenanigans of the housemates – kissing, smooching, sex, flirting and other forms of immoral acts. Does that mean that Nigerians are foremost in such acts? I mean we have scored high in sex and sex related issues. Yet back at home, we pretend a lot about such acts. On this global TV, we didn’t fail to show the world the stuff we are made of in matters of bedmatics and the tricks surrounding it.

Our feat at the BBA is a part of a whole. These days, our students no longer concentrate much on their studies. Instead, they look forward to TV shows around the corner with the aim to get in there and make fast money. And they are so desperate to do whatever it takes to sweep the prize. That a lot of female contestants of most of the beauty pageants we have nowadays and other TV reality shows sleep with the organizers and the judges, is no longer news. The rumours and ruckus are everywhere. Such shows are degraded to the extent that some of the girls are even the one trying to entice those in charge, thereby reducing the competition to such an ignominious denomination of a case of “the best contestant in bed smiles home with the award”. Given the high frequency at which they spring up here and there, it appears that pageant shows are the fastest-booming venture in the showbiz world. Whether you call it a pageant show or beauty pageant or fashion pageant, they are a case of a rose by another name. The organizers make sure that voluptuous pretty young things are given the opportunity to contest, so they could have a field day devouring them one after the other. The “girl desperadoes” themselves don’t even wait for the indecent proposals to come; they invite them, and are ready to go all the way to clinch the ultimate position and the prize.
Gone are those days when intelligence, strength of character and personal beauty are the yardstick for the selection of crown beauty of a pageant or even the eventual winner of any show, be it a TV reality, modeling or what have you. Now “smartness” is the name of the game.
Consider the free use the “F’’ words, F this, F that, the violence, the insults, abuse, display of vital parts of the body, and lots more – at the end of the day, what are the viewers taking home? Men, these aren’t edifying! These days, bad things are easily emulated and practiced, so should our young ones start acquainting themselves with such vices and that means to an end?
I believe I’m not the only one whose senses were assaulted by the BBA funk; others are also asking questions too. Should one do all the bad things to win the Big Brother prize?
Don’t forget, the Bigger Brother up there is still watching.
As I end this article with anger in my heart, I leave you with the word from the Book of Idoma Elders, which says: Iju lopelani e dokwu nyogo. (A fly that has no one to advice it, follows the corpse into the grave.)