Another planet from galaxy

Another planet from galaxy 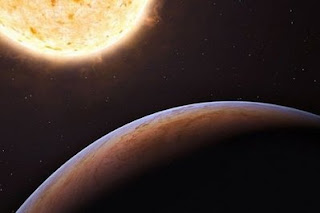 A hot, gaseous and fast-spinning planet has been found orbiting a dying star on the edge of the Milky Way, in the first such discovery of a planet from outside our galaxy, scientists said Thursday.
Slightly larger than the size of Jupiter, the largest in our solar system, the newly discovered exoplanet is orbiting a star 2,000 light years from Earth that has found its way into the Milky Way.
The pair are believed to be part of the Helmi stream, a group of stars that remains after its mini-galaxy was devoured by the Milky Way some six to nine billion years ago, said the study in Science Express.
“This discovery is very exciting,” said Rainer Klement of the Max Planck Institute for Astronomy.  Source Yahoo
Previous Post