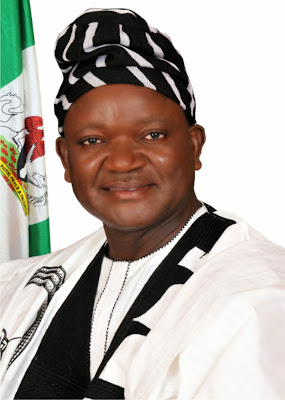 The All Progressives  Congress in Benue State has responded to a recent analysis by The Sun newspaper, where it claimed the party might lose its governorship poll victory to the PDP in the state.
The writer anchored his reason on the internal feud currently rocking the party.

However, in a quick response, Tahav Agerzua, the media adviser to the governor-elect, Samuel Ortom laughed off the crude analysis, averring that his inauguration was not under threat.
The full statement.
I read the full page feature written by one Ade Alade which was published on page 63 of Saturday Sun newspaper of May 16th 2015 with the rather amorphous headline “APC may lose Benue governorship poll victory to PDP, party leaders warn pre and post election cases threaten Ortom’s inauguration.”

One had expected to read the concrete source or basis of threat to the emergence of Chief Dr Ortom as Governor of Benue State on the platform of the All Progressives Congress, APC, rather the article dwelt on dubious claims and agreements as well as wishful and untenable thinking.
The writer, acting probably under pecuniary influence, ignored the facts on ground and bent backwards to satisfy the whims and caprices of those who paid the piper.

Otherwise how could he rely on claims that the APC had no candidate for the April 11 governorship polls when the party had submitted Chief Dr Samuel Ortom’s name to the Independent National Electoral Commission, INEC, which accordingly acknowledged and proceeded to display it among the list of contestants in the said election?Yet the article claimed that “Hon Emmanuel Jime is strongly laying claim to the party’s ticket having been adopted by four other aspirants and party leaders as consensus candidate before Ortom’s name was submitted to INEC.”

The final date for the conclusion of all party primaries was 11th December while that of the submission of governorship candidate’s names was December 25th, 2014 by which time Chief Dr Ortom’s name had been submitted to INEC.The article stated that the purported Jime adoption took place on 11th January, 2015; so how did this come before the submission of Ortom’s name?By this time it was only possible to substitute Chief Dr Ortom’s name if he voluntarily withdrew, on account of death, or court pronouncement, none of which happened.

Even if that were tenable why was it that the APC National Chairman, Chief John Oyegun, who was said to be at the meeting where the questionable adoption was said to have taken place still came to Makurdi four days later and presented the party’s governorship flag to Chief Dr Ortom on Friday, 15th January, 2015?

Moreover of the four said to have adopted Rt. Hon Jime two, Chiefs Akange Audu and Mike Iordye, declared before an Abuja Federal High Court that their signatures had been forged, while the third, Professor Steve Ugbah accepted appointment as Director General of Chief Dr Ortom’s Governorship Campaign Organization.

From the foregoing it amounts to standing logic on its head and proceeding from there to build castles in the air for any one to have any forlorn hope that the Jime governorship project would ever fly or that the PDP would reenter the Benue Government House in 2015 through the back door. Chief Dr Ortom’s nomination in the APC was validly concluded in accordance with the party’s constitution and guidelines in compliance with the Electoral Act.

The APC had amended its constitution last October to make provision for new entrants to contest for positions on the party’s platform within one day of their entry and for affirmation to be made in case of consensus candidates where primaries are impracticable. Given the Benue APC scenario that is what happened. Yes, there are court cases with regard to Chief Dr Ortom’s nomination but his lawyers have a rock solid defence.

Still the latest information on them is that the one at the Federal High Court in Abuja is at the stage of settlement out of court, the Peoples Democratic Party, PDP, has indicated intention to withdraw the other at the Makurdi Federal High Court while the election petition is at the preliminary stage.None of these are any threat to Chief Dr Ortom’s victory or inauguration. The hatchet job undertaken by one Tor Gowon Yaro, a self acclaimed but unknown party leader in Benue State, using ignorant and hungry writers to cause confusion will surely amount to nothing and their sponsors will go away empty handed.
Signed :
Previous Post

Society Watch- Where is Ada Chenge?

Society Watch- Where is Ada Chenge?