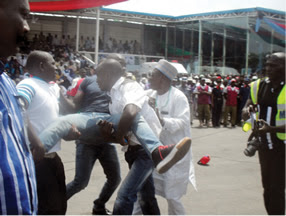 The journalist, Hir Joseph, who reports for the Daily Trust newspaper was covering the inauguration event when he was summoned by the thugs shortly after Gov. Al-makura and his deputy, Salias Agara, took their oaths of office at the Lafia parade ground. 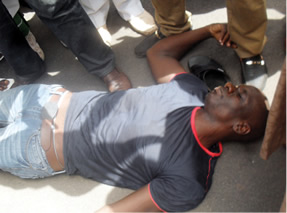 “I was watching the inauguration with some colleagues when the thugs who had the inscription ‘Ta’Al Boys’ on their T-shirts demanded that I follow them.

“I asked why they wanted me to follow them but they gave no answer. Rather, they pounced on me and dragging me at the same time. I only woke up in the hospital after.”

It took the intervention of the security operatives who fired teargas canisters at the hoodlums for Joseph to be rescued.
He was rushed to Dalhatu Specialist Hospital, Lafia for medical treatment.

OPINION! Why Some Benue girls are rated as prostitutes by Tor Shiekuma Felix

Controversy as El-Rufai reduces salaries by 50 per cent

Controversy as El-Rufai reduces salaries by 50 per cent