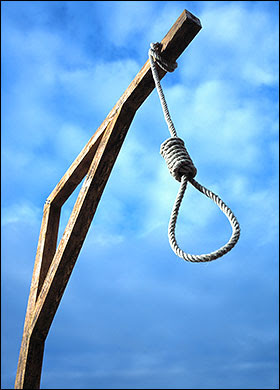 A High Court sitting in Makurdi, the Benue State capital, has sentenced a middle-aged man, one Tersoo Terna, to death by hanging  for stealing a Toyota Hilux Jeep belonging to a clergyman.
Justice Adam Onum, on Thursday, convicted the robber for criminal conspiracy and armed robbery.
The robber, according to the state prosecuting counsel, Mrs Jean Abba Ewurum, had told the court that the convict and three others now at large, conspired, attacked and robbed one Reverend  Peter Azuana of NKST at Mkar in Gboko Local Government Area of Benue State in  May 2012.
During the trial, the complainant provided  six  witnesses, while the vehicle’s document  was tendered, including a bag containing an expended bullet shell, four jean trousers, one singlet, a tooth brush and two identity cards all recovered from the convict were submitted as exhibits.
The convict also called on two witnesses;  his wife and brother who gave evidence in defence.
In his judgment, the trial judge,who highlighted  all evidences before him, said that a case of criminal conspiracy was established against the offender and accordingly sentenced him to death by hanging.
The judge rebuffed the plea of leniency by  the counsel for the convict, Mrs  C K Umburga.
Previous Post