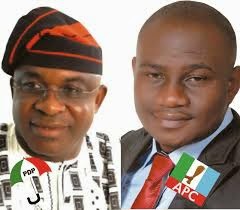 The Senatorial candidate of the All Progressives Congress, APC, in Benue Zone C, Daniel Onjeh has vowed to reject results from Agatu Local Government area and other interior villages in the district over alleged rigging.

Onjeh, a former students’ leader alleged that in some hinterlands in Idoma, the PDP members were buying voter cards and as well engaging in multiple thumb-printing.
Speaking with IV on Sunday from his base in Benue State, a visibly angry Onjeh said his agents were arrested yesterday in Agatu and detained till after the election.

He said they could not monitor the vote counting due to the development.
On why he would reject results from some polling units in the zone, Onjeh said the PDP took advantage of the malfunctioning of the card readers to manipulate election in some area.

According to him, “the APC Local Government Collation Agent was whisked away to an unknown destination yesterday at the time his presence was most crucial at the collation centre. Also, two ward collation agents of APC were arrested and detained by the police while they were collating results from the various poling units they supervised.

“Places where genuine accreditation took place commenced voting and counted results before 8 pm, but results of Agatu and the interior parts of some Local Government areas were delayed until this morning. This incident in Agatu paved way for PDP to stuff ballot till this morning.
“Under the guise of the inability of the card readers to capture finger prints, the PDP compromised the INEC officials into manually registering several names and allowing massive ballot stuffing in Agatu LG and interior areas of other LGs”, he said.

Onjeh added, “I call on the INEC to be vigilant and stand by the results in the card reader. The PDP is working hard to deny me victory in some place”.
According to a result obtained by this newspaper as at 22:40pm on Sunday, Onjeh was in a close run with the incumbent, Senator David Mark.