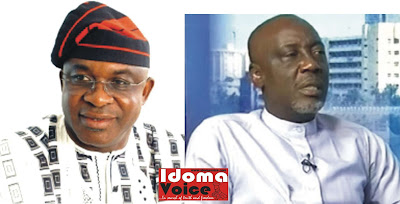 In this analysis, popular comedian and activist, Enenche Enenche takes at look at the ongoing political tussle over the soul of Benue South between Dan Onjeh and David Mark.

He sighted the possibilities of Mark pulling out of the battle for his ally, Comrade Abba Moro.
In December, 2010 when I stormed home for Xmas, what welcomed me to Otukpo, the headquarters of my ancestral home was the postal of a young man with the caption; DAYBREAK!
That day, I looked at the postals with pride, I saw someone from my generation rising up to make a statement even though his opponent was going to fall my comedy in matter of hours. I was in Otukpo for the wedding reception of Senator Mark’s younger brother.

I remembered making the Distinguished Senator to laugh even to the point of falling off his chair.
While all these were going on, the burden of my people at Otukpo/Otukpa road was burning within me. At this time, I have heard about the mess on the road, but I didn’t go beyond to see it as I had to return to Makurdi the next day, albeit, I came in contact with it few weeks later on the 2nd of Jan.,2011.

One thing that kept fascinating my imagination was the postal; DAYBREAK and the young man of my own generation who was the one leading the campaign.

Prior to 2011 elections, he was pressured by his party, ACN to step down, and he did. The dream of a young man never saw the daybreak of 2011 elections at the senate, but for house of reps, which he eventually lost in a controversial “180 days” gymnastics.
In 2015, the dream of this young and fearless man to see a “DAYBREAK” inspired him to lead a people to a poll.

Now, the fate of the dream of that “DAYBREAK” is hanging on the gavel of the Election Petitions Tribunal, handling Benue South Senatorial districts elections sitting in Makurdi.
The following are my prophecies of what I see after the judgement.

SENATOR DAVID A. B. MARK.
He has more at stake here, this is his 5th term, being the “last man st anding” of PDP and IBB structure, the sail may not be easy.
No state power at his disposal, the 2019 presidential dream is now in shambles following PDP defeat.
He has every right to panic, with the role he played to see a deputy senate president go to his ally, APC eyes are on the case now.

Judges are more fearless these days and manipulation is not an attractive venture in the Judiciary again, so the “Tiger Wood” of Idoma Kingdom has been scrippled politically.
APC now rule his state, local governments now in the hands of APC, a man that once suffered his political mischief is now the Deputy Governor.

Inability to close defence at the Tribunal, all his witnesses were discredited at cross examination at the dock, and him being a witness on oath not entering the dock to be cross examined, and the Tribunal now relying solely on Onjeh’s defence, this is a great set back for him.
With card readers dictating frauds already, if all or part of the election is cancelled, I don’t see Sen David Mark having the morale and moral credentials to stand before his people for a rerun… Not when his Apa State story is no longer sellable.

He can’t go to O’chidoma’s palace to seek for blessings because the famous O’chidoma road that leads to the palace is in ruins.
All his political enemies would now see the Tribunal in Benue as a fertile venture to invest their money in.
I see him pulling out to save his head and manage his dwindling image.
To consolidate the remnants of power back home, I see him shopping for a PDP candidate with strong grassroots support to replace him and I see that in Comrade Abba Morro.

This is the only way PDP may give APC headache, if at all the election is cancelled.
When this happens, expect campaigns like this;
“Idomas vote Abba Morro, if you don’t want to be slaves in the hands of Akume”.
“Idomas stay with PDP, so that Tivs don’t dominate you.”
Expect these kinds of sentiments. PDP may want Abba there and hoping that Ortom’s camp may split before 2019 and form alliance to snatch Government House in 2019.

COMRADE DAN ONJEH.
This young man is intelligent and fearless, he is not rich financially but rich in leadership.
He has not had opportunity to loot, men and women of goodwill finance his campaigns.
Oh Daniel, don’t rejoice yet, those who substituted your name in 2011 are still alive.
They are watching, and every change agent must watch. Please watch your back.

I pray that the Arch Bishop of Judges Quarters and the new Landlord of Benue State political powerhouse, does not trade you off again.
Oh Comrade Daniel Onjeh, I pray your DAY BREAKS this time around.
I rest my case!
Enenche Enenche (Comedian)
19th August, 2015. 2:15PM GMT+1