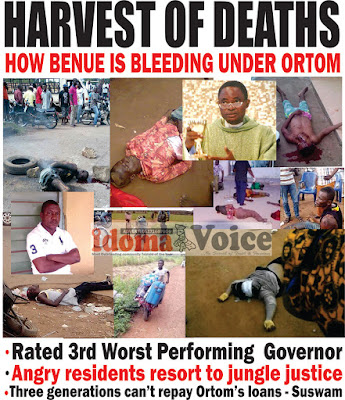 No fewer than 13 persons have been reportedly killed at Senga village in Kastina Ala Local Government Area of Benue State by suspected robbery gang.

ALSO READ:  Harvest of deaths! How Benue State is bleeding under Ortom

Spokesman of the Benue Police command Moses Joel Yamu stated that a five man gang belonging to the wanted notorious criminal, Terwase Akwaza also known as Ghana  had on Wednesday went to rob at Senga village, an interior part of Katsina Ala LGA.

According to Yamu, an irate mob had overpowered the bandits, lynched two of the them, one of which was later identified as “Chemical” (not real name) and a lady harbouring them were killed while the other three escaped to Gbishe village, where Ghana hailed from and mobilized for reprisal.
The police boss added that the robbers on return for reprisal could not gain access to Senga because the youths of the village had mobilized to protect their area.
He explained further that the robbers diverted to a neighbouring Kenvenger village, which was next to Senga, from where they shot and killed on the spot ten people including one Terseer Akaya, a driver from Katsina-Ala who went to convey farm produce.
Yamu added that an eight month old baby, eight year old child with their mothers and six others were killed in the process while five other persons injured were rushed to the hospital and are receiving medical attention at NKST hospital at Kera in Katsina-Ala LGA.

Yamu added that the state command had since deployed officers to the area to curb the situation.
For Advert: Call 08171607004, 09058228464 Follow us on Twitter @idomavoice, @idomanews Send us releases at idomavoice@gmail.com