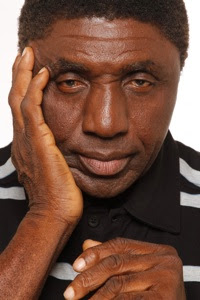 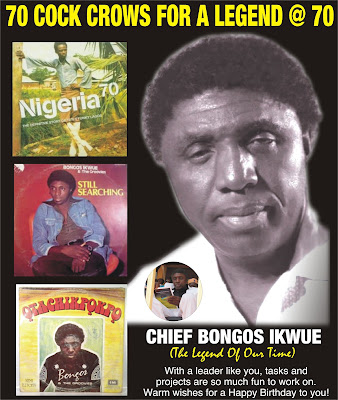 For Groovies Music exponent and founder of Otukpo-based BIK entertainment outfit, Bongos Ikwue, turning 70 marks a new beginning in his life.
The veteran singer, who believes in universal peace and love recently joined the Septuagenarian club amid pomp and pageantry in Otukpo, the traditional kingdom of Idomaland, in Benue State.
In a telephone chat with VC, elated Bongos said: “I just want to thank God for the  journey so far. I must confess that God has been faithful to my entire family and I.”
Asked on when his much-awaited album, The Way It Is would storm the market shelves, the Engineering graduate of the Ahmadu Bello University Zaria said: “I just want my fans to watch out for my forthcoming album. It’s almost ready and would soon be released into the market.” When prodded further to speak more on the album, the Otachikpokpo crooner said he would soon make official statement as regards the album.
Bongos, in his active days on stage, was a toast of music buffs as far back as the late ‘70s and ‘80s. Having registered his mark on the musical platform alongside other talented singers like Victor Uwaifo, the late Aku, Victor Olaiya and Onyeka Onwenu, Ikwue released evergreen numbers such as Otachikpokpo, Maryam, Still Searching, Ella and many others, all of which are still enjoying airplay on many radio stations.
Before relocating to his country home in Otukpo, where he now runs an outfit called Double K Resort, the entertainer-turned entrepreneur and his Groovies band were the talk of the town in the 70s.
Bongos has equally been able to inspire many younger Nigerians with his ballad music; and he has continued to do so by nurturing a group of young men drawn from across the continent to make up his band.
Meanwhile, the Conference of Idoma Artistes (CIDA) in a goodwill message to Bongos said: “We want to wish our father in the industry, Chief Bongos Ikwue happy 70th birthday and we pray God to bless him and his family.”
Previous Post