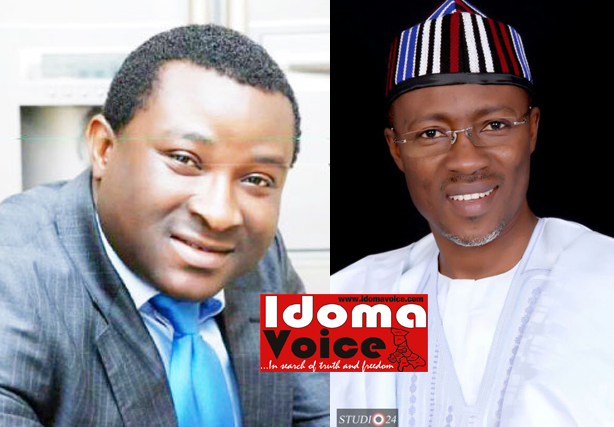 Indications emerged last night that the gubernatorial flag bearer of the Peoples Democratic Party, PDP, in Benue State, Terhemen Tarzoor might have settled for top EFCC lawyer, Paul Harris Ogbole as his running mate in the 2015 election.

His name was reportedly sent last night to beat the deadline given by INEC that all primaries should end yesterday and names of successful candidates submitted before 11:59pm.
With this, the Idomas have once again accepted to play the second class role in Benue State after 38 years.

It was gathered that Ogbole, who initially indicated interest in the governorship ticket later pulled out when Idoma elders prevailed upon him to step down for a sole candidate.
Insiders hinted this reporter that Ogbole became the anointed one among several names penned down after a close door meeting between the big wigs of the party in the state.
However, his emergence has been greeted with mixed feelings as many indigenes are not okay with the development bearing in mind that Ogbole is a native of Otukpo LGA, where the Senate seat for Benue south has remained for the past 15 years.
Analysts have submitted that since the Senate President has emerged as the flag bearer of PDP for senate, it would be wrong to have Ogbole as the Deputy Governor of the state.
Ogbole’s emergence has since put to rest the struggle by other politicians for the number two seat.
DAILY POST observed that one of the aspirants in the election, Sam Ode had in a full page advertorial in ThisDay newspaper congratulated Tarzoor for winning the keenly contested election, an action many observer see as a campaign for the deputy governorship slot.
Other persons such as Mathias Oyigeya, Emmanuel Agbo and John Ngbede were also considered for the seat but political calculations did not favour them.
Reacting to the development, coordinator of Idoma Governors Support Group, IGSG, Peterhot Apeh insists that the Idomas would not accept the number two seat again.
“We should disown him and continue with our stand on ‘no Idoma candidate, no election’ as we advocate for boycott. We are calling on Idoma to shun PDP and give APC a blocked vote as protest,” he told DAILY POST on phone.
Similarly, Social analyst and Coordinator of Idoma People of Nigeria, IPN, Josephine Akioyamen described the development as ‘unfortunate’.
The outspoken activist wondered how long the Idoma would continue to betray themselves for personal interest, saying that time has come for the younger ones to dislodge the ‘old men’ from the Idoma political terrain.
On his part, journalist-cum-activist, Prince Yemi Itodo maintained that it is unfair that Otukpo LGA still produces the deputy governor having occupied the Senate seat for 15 years.
While describing the development as a ‘political robbery’, he called on all Idomas to come and kick against the decision.
“It would amount to political suicide if all other LGAs if Otukpo is allowed to produce deputy Governor in this dispensation. We are not party to any Deputy Governorship arrangement. This is pure political robbery,” he said.
However, the party was yet to react to this hearsay at the time of this report.
ALSO READ:  Alia’s refusal to sympathize with Uba shows he lacks compassion
Previous Post