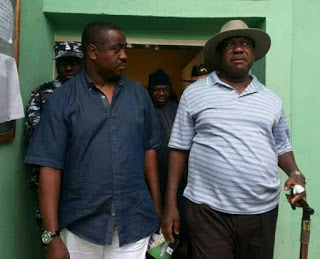 The Economic and Financial Crimes Commission, EFCC, is set to pick two former governors of Benue State, Geroge Akume and his successor, Gabriel Suswam over issue bordering on corruption.
According to PUNCH, the Attorney General of the Federation and Minister of Justice, Mr. Abubakar Malami, had written to the Chairman of the Independent Corrupt Practices and other related offences Commission, directing the reopening of the cases of the ex-governors.
Malami had since called for the case files of the former state governors.
The AGF letter defines high-profile cases as cases “involving alleged misconduct amounting to economic sabotage; involving complex financial transactions or property movement; involving any of the suspects, who is a politician, a public officer or judicial officer; and where the subject matter involves government or corruption of its official or involves the abuse of office.”
Others who will soon face the music of the anti-graft commission alongside Suswam and Akume are, They also include Ikedi Ohakim (Imo); Obong Victor Attah (Akwa Ibom); Achike Udenwa (Imo); Abdullahi Adamu (Nasarawa); Gbenga Daniel (Ogun); Jolly Nyame (Taraba); Boni Haruna (Adamawa); Rashidi Ladoja (Oyo); Attahiru Bafarawa (Sokoto) and Adebayo Alao-Akala.