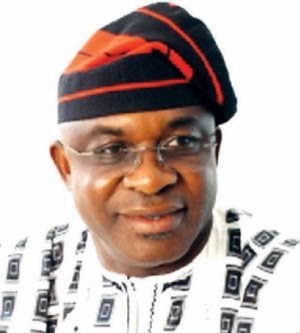 According to THE NATION: Senate President David Mark is allegedly plotting a sensational return to the plum office regardless of the defeat of his party, PDP, in the recent elections.
Although, the PDP won only 45 seats in the elections as against the 64 by the All Progressives Congress (APC), Mark believes he stands a good chance of snatching the position from the APC.
His calculation, according to sources in his camp, is that the APC will zone the Senate Presidency to the North Central from where he hails.

He will subsequently penetrate and divide the APC senators, and then win to his side some of them who will vote for him along with the 45 PDP senators.
The plan, The Nation gathered, is Chief Mark’s contribution to the effort to rebuild the PDP ahead of the 2019 elections.

He is said to have the support of PDP leaders who believe that he is the only one, for now, who stands a relatively bright chance of standing up to the APC and stop the PDP from losing out completely to the APC.
Sources close to his camp said he may have found an accomplice in an APC senator who is a former North West governor.
The former governor is expected to work on his fellow APC senators to back Mark.
A massive war chest of N10billion is allegedly being readied for the battle for the Senate Presidency, sources said.

Mark who has been in the saddle since 2007 is one of the few PDP members to win in the last senatorial election in the North.
Some PDP members do not want him to return to the Senate as minority leader or an ordinary member having been Senate President since 2007.
A party source said: “Our leaders are thinking of how to manage Mark’s situation because we do not want him to play a second fiddle. He was elected on March 28 based on our previous equation that we would still retain power.

“Our leaders are calling for a new international role for Mark who has become a statesman in view of the manner in which he had used wisdom to save this nation at its crisis time. Some are also saying that Mark should play a strategic role in the reformation of PDP ahead of 2019 elections.
“Although the ultimate decision belongs to the Senate President because  has the mandate of his people, he is a party man.” But Mark has a different idea.
Reacting recently to the gale of defections from his party to the APC in the aftermath of the Presidential polls, Mark vowed to be the last man standing who would help in positioning the party for future elections.

“I have no reasons whatsoever to leave PDP, no reasons. I have risen to where I am on the platform of PDP. PDP has a manifesto and I believe in it,” he said during a mass held at St. Mulumba Catholic Chaplaincy, Apo, Abuja, to mark his 67th birthday anniversary.
He added: “Those who are leaving PDP now are fair weather friends of PDP.  So they have gone (and) they have no problem. When PDP bounces back in a few years in the next couple of elections or next election they will come back again to PDP. So they will move. Those ones are not really the issues.