IDOMA VOICE earlier reported that the women’s volleyball team from the University of Wisconsin-Madison were all over social media and made many news headlines last week, but not for the sporting reasons they’d have wanted. The team, nicknamed the Badgers, had been successful on court, winning the 2021 Big 10 championship last November. But the recent coverage was a lot more sinister, as photos and video that is believed to have been captured during those title celebrations were leaked online, including explicit images and footage which was not intended to be circulated to the wider public.

It wasn’t long after the leak had gone viral that the team were back on the court and doing what they have proved they are good at. On Friday evening in Madison the Badgers beat Michigan State 3-0 and this was followed on Sunday with a 3-1 victory over the Wolverines.

For anyone who thought the team may be phased by the scandal, they were quickly put right.

UW Athletics confirmed that they had been made aware of the se3ually explicit photos and videos being shared via digital media and that they were investigating , with the police also getting involved.

The organisation released the following statement:

‘We are aware that private photos and video of UW volleyball student-athletes that were never intended to be shared publicly are being circulated digitally. The unauthorized sharing is a significant and wrongful invasion of the student-athletes’ privacy, including potential violations of university policies and criminal statutes. When the student-athletes became aware of the circulating photos, they contacted the UW-Madison Police Department. 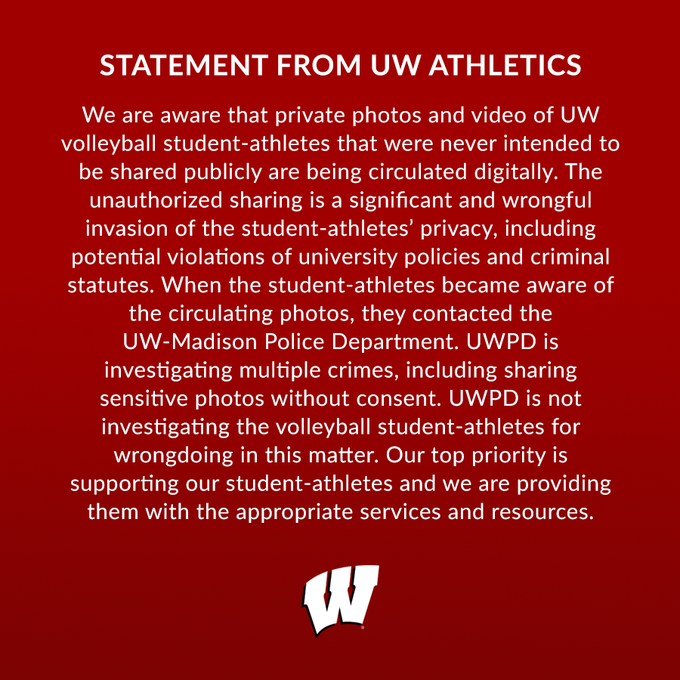