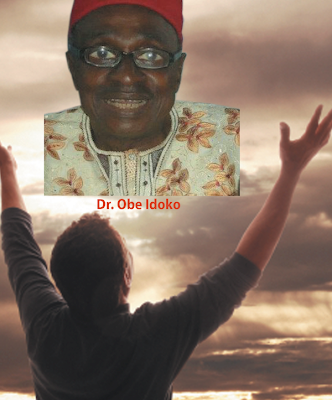 I write mostly on national issues but the native blood in me is pumping right now. I have been jolted by the painful fall of Ai-Aroga greatest ever iroko tree. The demise of the Odejo, the great Dr Obe reverberated like a thunder through a thick forest. As the Odejo goes home this weekend, 6th of April, 2013, the question I never stopped pondering is whether we as a clan will ever be the same again.
What we do for ourselves alone dies with us; what we do for others and the world remains and is immortal. Dr Obe will remain immortalized by his uncommon philanthropy and humanity. Going by the many eulogies/tributes poured on social networks and dailies, the Odejo is without doubt a man whose enormous goodwill will outlast many generations.

As I gleaned from publications in many of these media, I discovered that Dr Obe ran most of his businesses like NGOs. The Salem Hospital and his extensive farms were where the needy found hope. Salem was the hospital of choice for all classes and it is no wonder that more than half my generations in entire Idoma land are Salem babies!

This is not another tribute. His many traditional titles and national honours attest to his endearing philanthropic works. The title of Odejo aptly captures his exceptional generosity. Odejo, the great tree that bears fruits all season for every kind of birds.

I am deeply concerned about what this big loss portends for Ai-Aroga and Owukpa in general. There have been sad traumatic loses in recent years, many big guns, leading lights in land have passed away and remembering these names still evokes tears in me.
I write as a product of these generous benefactors without I whom I wouldn’t have the opportunities I have today. I only have the joy to write on this occasion because the Odejo, though still will be much missed, lead a long fruitful life. The questions is- who step in the shoes of these great names, particularly that of the great Odejo?
Ai-Aroga is a great clan. I don’t understand it but I know we have a rare blood, almost royal, running in us. That never-say-die spirit possesses all of us and it is the reason we are daring, that incurable audacity that says- go get it.

Our entrepreneurship and intellectualism equals that of the Israelites and many who don’t understand us see us overly ambitious and tag us ‘arrogant Ai-Aroga’. No, we are simply people with a large heart and nobody will deny that our humanity and generosity robs off wherever we are found. We stand for others, rallying them to live out their potentials.

That is why Odejo is the common middle name for the men. We call our women ‘Igor’ because we believe we are arms for our wives and daughters to lean on, to feel protected and petted. In so doing we inspire them to believe in themselves. No wonder our women are the most empowered in the land. We are great. It is not about how rich we are.

We may not be rich materially but we are rich in heart, in culture, in traditions and in unity. Holding hands we move together, guiding ourselves, helping ourselves, and achieving our dreams together. The great doctor, the Odejo epitomizes all of the above, an inspiring leader, and a warrior of no equal. Now that he had passed away, along with many of our finest, which way forward?

We mourn, but we should refuse to be cast down. Nobody should lie, crying with his face on the pillow. In the words of Les Brown, when situations throws you down, try to land with your face up because if you can look up, you can get up. We should surmount courage in the face of these traumatic losses and rise boldly. Let us make the spirit of these heroes’ smiles at us. At no time do our youths need to rise with new zeal and face up with the challenges of life in this competitive age.

We have thousands out there good enough to be trail blazers in whatever field of human endeavour. We should continue to hold hand and rally these ones. We need men and women to follow in the footsteps of the Odejo.

Obe was an entrepreneur that built empires solely committed to catering for our people and empowering men and women even beyond our land. He saw means but never built mansions. He chose to channel his resources to better the lives of others. Salem hospital was where a lot found medical succour and employment. His farms provided mass employments for the poor and the unskilled of our land. I am challenging our sons and daughters of means to emulate this uncommon service to humanity. Let the wellbeing and empowerment of our people be our interest. That is the spirit of Ai-Aroga.
The Odejo was a politician of the ‘80s. I wonder if he will be interested in today’s do-or-die politics. He is simply too clean for that. He wouldn’t associate with the then NPN.

I don’t even think he was fashioned for politics but the desire to bring meaningful development home is at the very heart of the issues that pushed him to politics. He played clean and fair. If the process wasn’t truncated by the military many believed his team would have eventually dislodge the then corrupt incumbent. Whatever, that singular effort highlighted the Owukpa district on the map of Benue. The land is still waiting for true warriors, with genuine heart for the land to complete this unfinished business.

Owukpa is in my mind. The district has remained polarized for many years. In spite of many national leaders, there is no visible traditional ruler, no thanks to bickering amongst the clans. Time has come for a fusion of interests and we need men of large hearts to champion this.

There are daunting social economic challenges and in the complex chess game of Nigerian politics, not different in Benue state, and we need to hold our own in the scheme of things. There must be deliberate effort to groom tomorrow’s leaders if we don’t want to be eclipsed in today’s political equation. The quality of our leaders, our representations go a long way in how much infrastructural development we attract to our land.

Surely drums will roll out this weekend to celebrate a life well spent but I enjoin all sons and daughters to spare a moment for reflection. Is turn out of leaders in the mould of the Odejo being sustained?

This is a clarion call. Time has come for serious prayers and refocusing to sustain those ideals that make us special. I call on the Ai-Aroga youths to shun social vices and take up the gauntlet and be true stars. We are never known to be mediocres.

We will be failures if we don’t achieve more than our fathers. I call on our women, the IGORs to continue to imbibe those virtues that stand them out, that make them the toast of suitors. And I call on the elders, and all men and women blessed with means to continue to invest in the future of the land, making sure our youths are given a fair shot at life.

As the Odejo goes home, may he remained immortalized in our hearts? As we celebrate his long glorious life, may the spirit of untimely death truncating the lives of our best and promising men be exorcised from the land? May our land continue to be green, turning out not only food but heroes for the entire nation? This way the great Doctor will be smiling at us from his eternal home with the Lord. Adieu Odejo!
Abah John Abah, a sailor resides in Lagos, Nigeria.
Previous Post