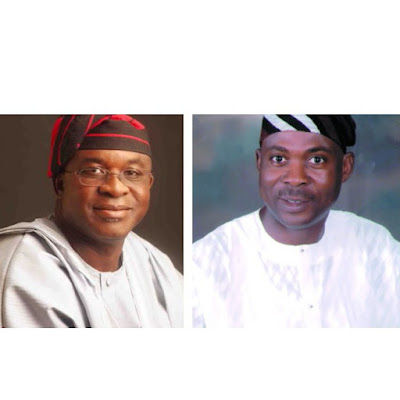 Fresh facts have emerged over the ongoing political romance between immediate past Senate President, David Mark and his once rival, Usman Abubakar, otherwise known as Young Alhaji.

This, IDOMA VOICE exclusively gathered that Mark has promised to hand over the baton of leadership to him in 2019 should he win the forthcoming rerun.

Mark and Young Alhaji have been sworn political enemies for years over the outcome of the 2003 and 2007 senatorial elections in the zone.

Abubakar claimed he won both elections but the court threw out his cases, on the ground that they don’t have substance to remove the Mark, a former governor of Niger State.

In fact, there were unconfirmed reports that for daring to test the political might of the Akpegede warlord, some business lines of Abubakar were sealed.

He was picked by Steve Ugba as running mate during the 2011 guber election in the state but they could not cross the River Nile.

Known for his philanthropic nature, Abubakar, a native of Orokam has since decided to maintain a low lifestyle following his unsuccessful attempts in politics.

The former chieftain of the now rested Action Congress of Nigeria, ACN, decamped to Accord Party before the general elections, claiming that the former Benue State governor, George Akume has converted the All Progressives Congrss, APC, in the state to his private company.

However, Young Alhaji bounced back into the spotlight towards the tail end of 2015 after he openly declared his support for his once political rival, Mark against his own Orokam kinsman, Daniel Onjeh.

Amazingly, findings by IDOMAOICE.COM reveal that the former senate president has promised to hand over power to him in 2019 if he wins the rerun.

“He promised to handover to him in 2019. But Young Alhaji told him it was not interested. That all he wanted was for him (Mark) to win APC then their war continues.

Asked why he decided to support Mark against is own Orokam brother, the source told IDOMA VOICE that Abubakar might want to spite his former party man, George Akume for privatizing the ruling party in the state.

“You remember what he said before he decamped to Accord right? He said the former governor has turned APC to Akume Private Company. Young hates cheating and I see reason with him. He has not officially joined PDP. I’m sure he’s just doing all that to punish Akume. He has nothing against Onjeh as a person, the problem is with APC,” the source added.

Several calls to the phone of the business mogul hit the rocks.

One week after ‘Idoma elders’ called for his removal, AVM Morgan asked to go on retirement leave

One week after 'Idoma elders' called for his removal, AVM Morgan asked to go on retirement leave