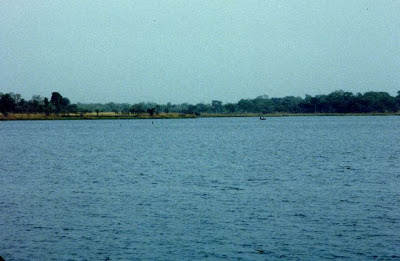 Residents of Lokoja are currently living in fear of the possibility of another flood disaster, following a noticeable increase in the water levels of River Niger and River Benue.
Lokoja, which was affected by the 2012 flood disaster, is a confluence point for River Niger and River Benue.
The Nigerian Metrological Agency (NIMET) had in its 2013 weather forecasts, listed Kogi as one of the states likely to experience flooding this year.

Nine Local Government Areas in the state, including the Lokoja Local Government, were affected by the disaster last year.
The disaster which rendered thousands homeless, also washed away farmlands, poultry and fish ponds, killing 13 people.
People residing on the bank of River Niger said that they noticed a steady rise in the water level about five days ago, expressing fear that the river might overflow its banks soon.
One of them, Rekiya Mohammed, said that many residents were aware of the NIMET forecast.
She said, however, that the residents had no alternative place to relocate to, as they were born and raised up in the area.
The Kogi Deputy Governor, Yomi Awoniyi, also confirmed the increase in water level, advising those living in flood-prone areas to relocate immediately.
Awoniyi, who also doubles as the Chairman of the State Emergency Management Agency said that the state was not ready to go through another harrowing experience of flood disaster.
He appealed to the affected residents to relocate to higher plains in the state, adding that reports reaching the government indicated that the water levels in both rivers were on the increase.
He appealed specifically to residents of Adankolo, Sarki Noma and Gadumo, to avoid a repeat of last year’s painful experience by moving out of the areas without further delay.
The deputy governor said that government was already putting in place temporary camps in the nine flood-prone Local Government Areas in the state.
Awoniyi, however, appealed to the people to remain vigilant and be ready to give necessary information and support to the government and rescue agencies.
He said that government would embark on the collation of names and other data of those being asked to relocate.
Awoniyi said that the action would help to guide the government in determining the best form of assistance to be given to the people.