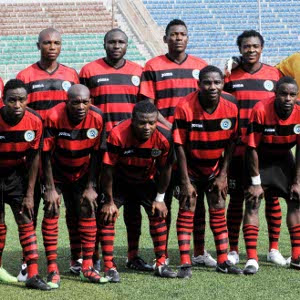 Lobi Stars centre-back, Anthony Agbaji has said his side’s defeat to Nigeria National (NNL) side, Apa United in the final of Benue State FA Cup will not count in Wednesday’s Nigeria Professional Football League (NPFL) Matchday 10 clash against Enyimba at the Emmanuel Atoung Stadium, Katsina Ala.
The 2012 Federation Cup finalists were stunned by Apa United 3-5 on penalties after score at full time stood at 1-1.
Agbaji said the defeat to the second tier Nigerian league side will spur on the side to go all out for the maximum points against the former two-time African champions.
“Of course, the state FA Cup final tie defeat to Apa United will count as nothing when we face Enyimba on Wednesday in the NPFL Matchday 10 in Katsina-Ala.
“It won’t affect our morale negatively rather we’re imbued and challenged by the defeat to a lower league side to go all out to inflict same pain on Enyimba.
“I think we’re gingered to fight for the maximum points, now that a smaller side have beaten us we’ll take it out on a bigger team.
“Enyimba’s league tie has been uppermost in our minds not the FA Cup final, so while the opponents, Apa United saw it as a do-or-die affair our interest is to grab the three points against Enyimba.
“Good enough we’ve qualified for the national finals and when the time comes we’ll prove to all that we’re a strong force in the land.
“We have our target well mapped out and that’s to secure a continental ticket,” said the Lobi Stars strongman to supersport.com.
The Makurdi-based side are eight on the Nigeria Professional Football League (NPFL) log on 13 points from a possible 27.
Previous Post