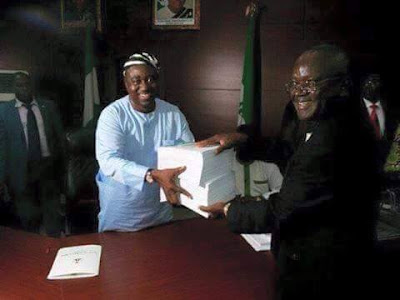 After a long wait, Gabriel Suswam of Benue State handed over a ‘battered’ baton of leadership to Dr. Samuel Ortom.

In fact, the new government will no doubt have a rough beginning in the state as the former government had literarily inflicted some political wounds on the State.

Aside the several abandoned projects, which the governor inherited, Ortom will have to sweat it out to pay a whooping sum of $28,791,949.55.

This has raised eyes brows among Benue natives, who have wondered how the state got there after the debt relief by the Paris Club and other multilateral creditors in 2005.

It could be recalled that under the Federal Government brokered agreement, Benue State enjoyed a debt relief of $242 million from the Paris Club and £92 million from London Club of creditors.

Before Suswam assumed office in 2007, domestic debts to contractors in the state were reduced considerably by the Akume administration.

Many believe that the state was debt-free when Suswam assumed office on May 29, 2007.

Also, Suswam’s eight years as the number one man in the state no doubt enjoyed serious bashing and criticism from citizens over non-performance and incompetence.

From the agricultural sector, education, health, sports, just to mention but few, the governor is believed to have nothing or much to revive them.

The collapse of primary education in the state
In 2014, children attending public primary schools in Benue State were stuck at home for 10 eight months following a deadlocked dispute over teachers’ salaries since the implementation of the national minimum wage.

Other tertiary institutions were also shut for months over the governor’s refusal to pay lecturers’ salaries.
Though he had promised to give top priority to the education sector, the promises have turned out to be mere tales as evidenced in the closure of most tertiary institutions including the Benue State University.

Abandoned projects
In the state today, industries like Taraku Mills, Otukpo Burnt Bricks industry, Benue Breweries, Katsina Ala Fruit Juice Company, Makurdi Sheraton Hotel, the Greater Makurdi Water Works, among others, have either fizzled out, liquidated or taken over by weeds.
Painfully, various road projects for which huge sums of contract sum have been awarded have been abandoned.

The governor had obtained a whooping N18 billion bond from the capital market to enable him fund what he described as ‘critical projects’ including: the reticulation and upgrading of water works in Makurdi, Otukpo and Katsina Ala; upgrading/ rehabilitation of Daudu-Gbajimba 48.50 km road; rehabilitation of township roads; construction Wannune-Ikpa-Igbor 36.732km road; construction of Oju-Obusa-Utonkon 51.48 km road; construction of Taraku- Naka-Agagbe 61 km road as well as the completion of rural electrification projects, among others, which have been captured in the 2015 budget. These have all been abandoned and the money has not been accounted for.

Worse still is the abandonment of contract for the rehabilitation of the state-owned media establishments like Radio Benue, The Voice Newspaper and the Benue Television project which has gulped about N628, 889, 919 since it was started more than seven years ago.

However, on assumption of office after an eight- year stint in the House of Representatives, Suswam had vowed to make the welfare of workers and pensioners his top priority.

Sadly, yesterday, he left with five months unpaid salaries. Most of the workers have either died in penury or fallen sick due to non-payment of their salaries and entitlements.

During his inauguration on May 29, 2007, Governor Suswam said: “In accepting your mandate here today, I pledge before you all, before my creator, the only living God I serve, that I desire to give my people no cause whatsoever to regret.

“I desire and pray that the Almighty God will make me surpass the achievements of my forbearers who have brought us this far….Our administration is committed to creating a transparent, honest and egalitarian society based on the rule of law.

“We shall, therefore, wage a war against corruption just as we shall insist on high standards of probity and accountability from public officers. This administration shall promote greater transparency in the handling of government business and shall insist on due process in all government transactions.

“For, according to Thomas Jefferson; one of the foremost of American presidents, ‘when a man assumes a public trust, he must consider himself a public property’. I agree absolutely with this thesis.”

After taking the exit door on May 29, many Benue citizens are wondering why he woefully failed to fulfill even one of the above promises.