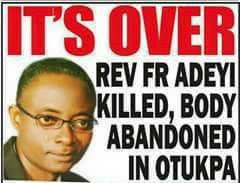 A group known as ‘’Otukpa Alede Club 1978’’, Abuja chapter , has called on the new Inspector-General of Police, Ibrahim Idris, to, as a matter of urgency, take over the full investigation into the matter that led to the kidnap and murder of Rev. Father John Adeyi.
Father Adeyi, who was the Vicar General of the Catholic Diocese of Otukpo until his demise, was kidnapped on April 23, 2016 while on a priestly assignment to Ogbadibo Local Government Area of Benue State.

The remains of Fr. Adeyi were later found in a nearby bush in Otukpa, after the kidnappers had extorted monies running into millions of naira from his family.
A statement issued by the Club’s Chairman, AIG Paul O. Ochonu (retd.), said the IG should take over the case from Benue State Police and beam his investigative searchlight on all the nooks and crannies of the state including the Vicar General’s primary constituency, the Otukpo Catholic Diocese.
Ochonu, who condemned the kidnap and eventual murder of Rev. Adeyi, however lamented the current criminal activities in Ogbadibo and its adjoining areas. He urged the Police in the state to deploy enough manpower to the area to curtail the rising crime wave.
“These crimes include but not limited to robbery, abduction, cultism and other cult-related activities by youths and the unemployed,” he added.
He noted that the circumstances surrounding the death of Father Adeyi, the first indigenous priest from Otukpa, had brought to the fore the need for vigilance, effective policing and the teaching of core family values as a way of inculcating in the younger generation the need to respect and dignify life.


The club appealed to law enforcement agents in the state and the Catholic community to collaborate and ensure that the perpetrators of this heinous crime were brought to book.
“We condemn in totality the kidnap and subsequent murder of Reverend Father John Adeyi, a peace-loving priest who contributed immensely to the peaceful co-existence of everyone and also encouraged the entrenchment of good morals and family values in the entire Idoma nation,” Ochonu said.
The chairman added that the incident was a wake-up call to the entire Idoma nation, especially Idoma West and Otukpa in particular.
“Kidnapping, cultism, robbery and killings as we are witnessing now are alien to us. We are a peace- loving and God-fearing people who respect the dignity and sanctity of life. We must all come out to condemn this act, especially the introduction of kidnapping and killing in our area. The Idoma people are not known for such illegality,” he said.

See pictures of ‘Akika’ Idoma currency used by our forefathers