From Wukari, Guma, Agatu, to Lafia… Tales From a Bloody Week of Sensless Killings

From Wukari, Guma, Agatu, to Lafia… Tales From a Bloody Week of Sensless Killings 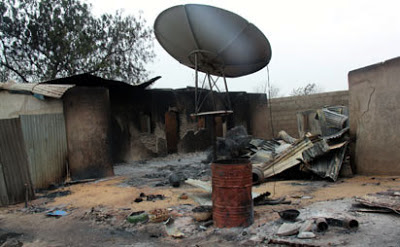 Mrs Ladi Eliga sat with her barely a year old son, little Peter, who slept on continually, undisturbed about the event of the day. Suddenly, she was tapped by a fellow widow who informed her that the National Anthem was on. She sprang up, and joined dozens of other widows, children and relatives of slain security personnel who were murdered – and their corpses gathered and set on fire in Alakyo, a village at the outskirt of Lafia, the troubled capital of Nasarawa State.
“Arise O’ compatriots, Nigeria’s call; obey… ” Mrs Eliga sang, standing at attention, like the others. Their voices were loud and clear, and they echoed. But they sobbed as they sang the National Anthem, a civic responsibility they had to carry out that afternoon in the large conference room of the one-storey building that is Government House, Lafia.
Mrs Eliga and the other widows of slain security forces were in Government House to lead a protest against the murder of their husbands and fathers at the village, last Tuesday night. The police command has accused Ombatse, which they say is a traditional religion of the Eggon tribe of Nasarawa.
The security personnel ran into an ambushed laid by their killers, the police said, but a source who claimed membership of Ombatse in an interview with the BBC Hausa, had said they (Ombatse), stopped and inquired of the mission of the security personnel, who began to shoot, sparking up a violent retaliation that led to the murder of what he said was about 90. The last one week plus has been that of an eventful past of bloodbath with sensless killing. The reports paint a gory picture of a society where the people seem to say they do not like each other, to the extent that gruesome murder of scores of lives now becomes the option to the widening hate.
Before Alakyo, there was Wukari as well as Guma and Agatu in the two neighbouring Taraba and Benue states. Nasarawa shares boundary with Taraba in the South-East, and Benue in the South.
Reports said dozens of people have been killed in Wukari as clashes broke out between Christians and Muslims at a funeral in the metropolis. The violence broke out as a funeral procession for a Jukun local chief passed through a Muslim dominated area of the ancient town, with the mourners chanting slogans and songs that provoked the Muslim residents there to retaliate.
In the ensuing bloody clash, Jukuns and Hausas went after each other with dangerous weapons including firearms, reports, which also said property worth millions of naira was burnt, said.
Source
Previous Post