Fulani herdsmen proffer solution to clashes with Tiv, others

Fulani herdsmen proffer solution to clashes with Tiv, others 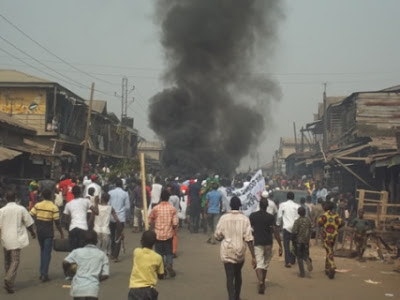 Worried by the persistent bloodbath between Fulani herdsmen and farmers in Benue, Nasarawa and other parts of the country, a group, Miyette Allah Cattle Rearers Association, an umbrella body of Fulani herdsmen, has called on the Federal Government to create grazing routes for cattle rearers across the country.
The association maintained that if created the persistent conflicts between herdsmen and farmers in Benue State and other parts of the country would be affectively curtailed.
Secretary of the association in the Benue State, Mallam Haruna Gololo, lamented in Makurdi, yesterday, the incessant loss of innocent lives in Benue communities arising from the Tiv/Fulani conflicts.
Gololo, who lamented the death of several herdsmen in the crisis, expressed reservations over the appointment of a Kanuri instead of Fulani as Special Adviser on Fulani Matters by the state.
Gololo attributed the continued hostility between Tiv farmers and Fulani herdsmen in Benue State to the lassitude of the governments of Benue and Nasarawa states, whom he said had not contributed to the recommendations submitted by the committee they set up to look into the crisis.
He said: “In spite of the killings and destruction of property, the report of the committee, which many hoped would give lasting solution to the crisis, seems to have been shoved aside by both governments.”
He, however, said efforts were on to forestall further crisis, disclosing that visiting Fulani herdsmen were now being registered by the Ardos (Chiefs) in the different local government areas to enable them have the identities of all visiting herdsmen in the state.
In the last few years no fewer than 1,000 lives were lost to persistent conflicts between Fulani herdsmen and native Tiv farmers, which had defied all attempts at amicable resolution.
Source: Vanguard
Previous Post