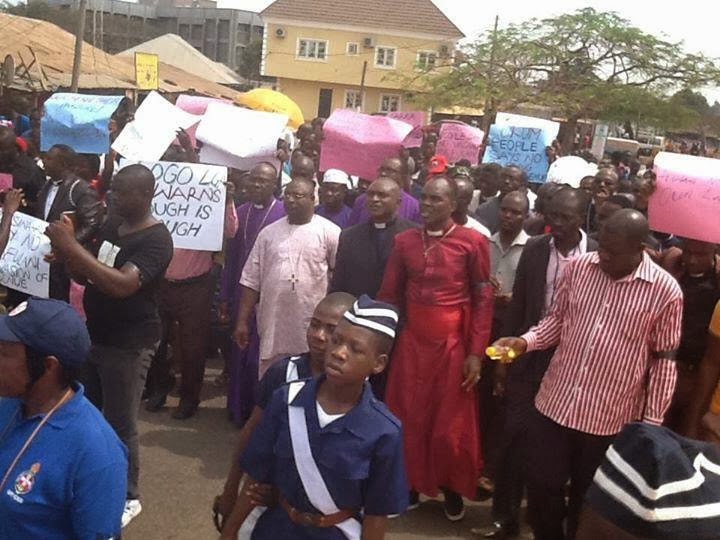 Scores of Christians who took to the streets of Makurdi, the Benue State capital to protest frequent attacks by suspected Fulani herdsmen stormed Government House and insisted that Governor Gabriel Suswam must provide answers why the crisis is unabated.
The protesters, including members of the Christian Association of Nigeria (CAN) and Movement for the Survival of Tiv Nation (MOSTIN) started the demonstration at the Wurukum Round About before proceeding to Government House. The protest which began at about 10 am lasted till 2 pm.

The protesters including men and women chanted songs and carried placards which read, “ Fulani must go”, “ We don’t need international cattle market, we need yam market” and “Fulani cannot kill our people again” among others.

The state president of CAN, Archbishop Yimam Orkwar and leader of MOSTIN, Timothy Hembaor who spoke on behalf of the protesters explained that they want government to close down cattle markets and compensate the people whose family members were killed and farmlands destroyed by the herdsmen.

Meanwhile, Governor Gabriel Suswam while addressing the crowd said that the Fulani militia perpetrating the incessant attacks are not herdsmen but trained terrorists who invaded the state and country to cause unnecessary destruction.

“These attackers are terrorists, they are not Fulani that we have lived with, they are using the cows as disguise to destroy this country and they are trained terrorists who are out to cause unnecessary destruction on the people.

The Fulanis that have lived in Benue are peaceful but the invaders are terrorists and I have confirmed this based on my security report.” Suswam stated.

Send your press release/articles to: apaupdate@yahoo.com or call 08177430989
Previous Post