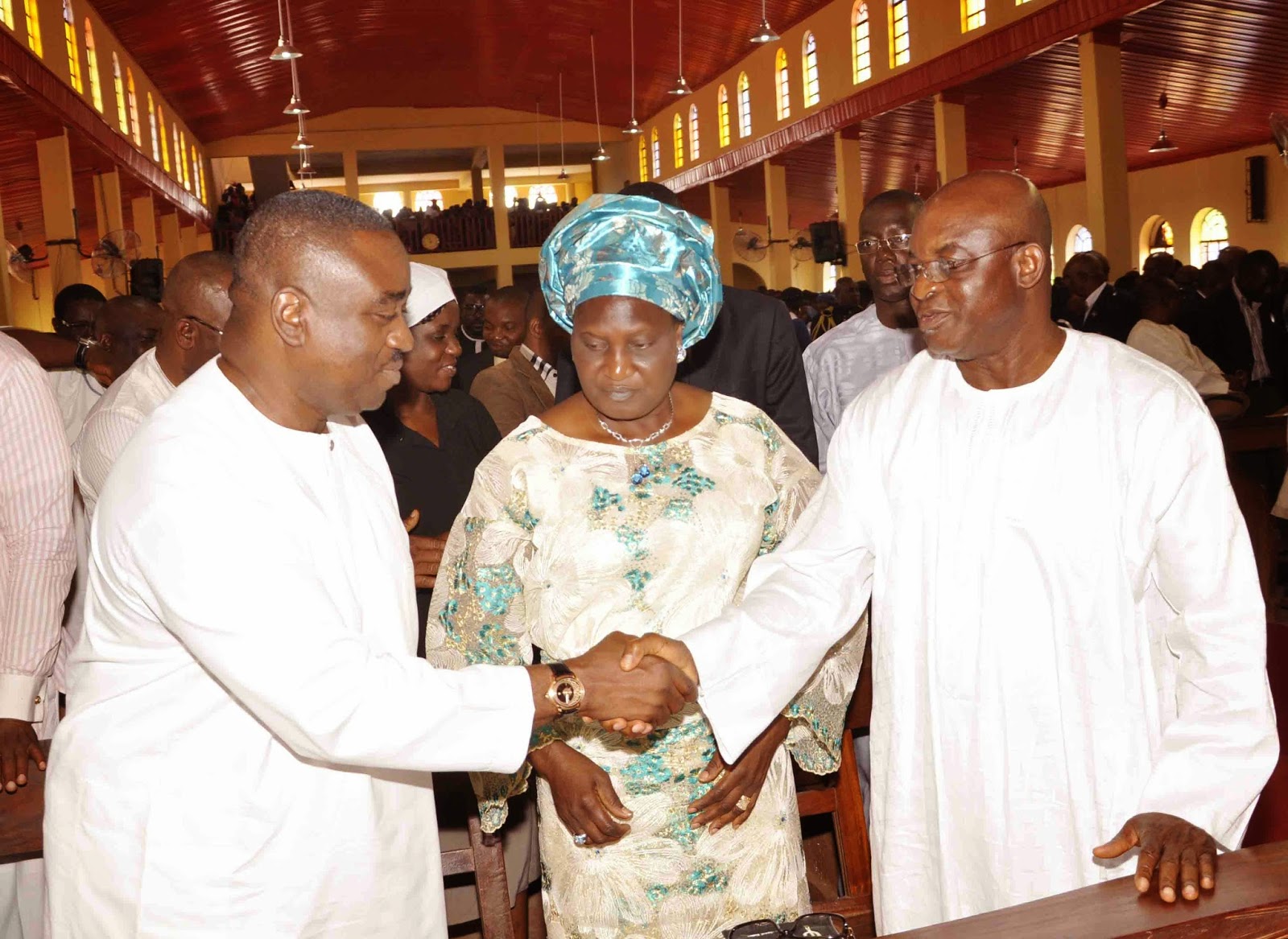 Source: Leadership Newspaper
This is the first time the agrarian Benue State will experience a sweeping change. The much reverend political gladiators like Governor Gabriel Suswam and Senate President David Mark that drive the Peoples Democratic Party (PDP) in the state, at least for the past 16 years, have dropped like a fallen tree. SOLOMON AYADO dissects the issues that propelled an overwhelming victory for the All Progressives Congress (APC)

In what can best be described as an end of terror and release of the people from bondage, the Peoples Democratic Party (PDP) in Benue state has finally been crushed by the leading All Progressives Congress (APC) after the PDP ruled the agrarian state with severe impunity for about 16 years.
Apart from the fact that those bigwigs that formed the APC in the state today are offspring of the PDP and or founding members, and defected because of alleged injustice and obvious misrule that greeted the party, there are several other reasons why the PDP should have collapsed easily, like an high-rise building that is built on a swampy ground.

Although it is obvious that the change in which the APC sailed its victory in both the presidential and governorship elections held in the food basket state, can be adduced to the expression of the people’s liberation, nobody can contest the fact that the people can be sick and tired with a party that has ruled them for decades, without meeting the yearnings of the people.
It all started like a joke because the PDP in the state, headed by Governor Gabriel Suswam has had no premonition that a merger party like the APC would afford to clinch the status of controlling the political drive of the state and the country.

The founding members of the party were hastily defecting to the APC but it had never at any instance occurred to the PDP that the massive decamping may dig a deep pit where the PDP will fall and finally be buried. Governor Suswam and his deputy, Chief Steven Lawani as well as senate president David Mark could not take any obvious measure to enhance reconciliation and pull back the defectors into their political fold.
While the then opposition APC, now the ruling party, was busy making underground efforts to work around a stable affiliation and evolve strategies that would coast it to victory, the PDP however, underrated the show and failed to quickly institute serious defensive measures to resist the intrigues that were being employed to defeat it.

The PDP met a woeful defeat during the presidential election that failed to deliver its candidate, President Goodluck Jonathan. The party also lost two senatorial seats to the APC in the state. Even Senate President David Mark that won a return ticket escaped the defeating lash by the whiskers when a former president of the National Association of Nigerian Students (NANS), Comrade Daniel Onjeh, pulled a near win in the senatorial election.

In the case of the governorship election, there was a crack in the PDP long before the party conducted its primaries and nominated Terhemen Tarzoor, a former speaker of the Benue state House of Assembly who became the flag bearer. The issues were that the most preferred candidates including the former registrar of Council For the Regulation of Engineering in Nigeria (COREN), Engr. Felix Atume and a retired permanent secretary, Mr. Hingah Biem and Chief Samuel Ortom were denied the ticket due to certain political calculations. This and other several reasons saw to the defeat of the PDP in the state.

Deception and Political Maneuverings
In order to concede defeat after they were not variedly picked as gubernatorial candidate of the PDP, more than 10 aspirants in the race including the former minister and attorney general of the federation, Mike Aondoakaa (SAN) and former minster of aviation, Samuel Ortom could not pretend about the way and manner the structures of the party were executed.
The other aggrieved candidates under the auspices of MINDA aspirants headed by Prof. David Ker, at the primary election promised to back Tarzoor who is one of their own, to get the ticket. But many of the aspirants alleged that the PDP and Governor Suswam deceived them to contest the election and squander their hard earned resources without finally actualizing their aims.
All the PDP candidates, about 30 who did not win the ticket felt deceived shortly after the primaries and started working for the APC, with underground arrangements. This is what caused the defection of Samuel Ortom to the APC. Furthermore, the PDP failed to reconcile the aggrieved parties till the elections came, a situation that handsomely resulted to the woeful defeat of the party.

Unpaid Salaries
At the time of the general elections, the Benue state Government had still not paid the salaries of workers for several months. The state judiciary and all tertiary institutions, as well as primary school teachers went on strike to press home their demands. This became the campaign message of the APC, which filtered convincingly to the nooks and crannies of the state.
Few days to the general elections, civil servants in Benue State protested the non- payment of their outstanding salaries, even as they threatened to shut offices if the state government could not clear the salary arrears.
The workers, under the auspices of Benue Aggrieved Workers protested in Makurdi and had also accused the state leadership of the Nigerian Labour Congress (NLC), purportedly led by the chairman, Simon Anchaver that it has compromised standard to press the demands of workers.
The leader of the protesting group, Barrister Uhundu A. Emmanuel stated “workers salaries are our rights and not favours and so to this end we demand that salaries be paid and paid at the agreed 18% minimum wage to all Benue workers irrespective of cadre.”

Diversion of Campaign Funds
This is another serious factor that enhanced the defeat of the PDP in the state. Some members of the Goodluck/Sambo and Tarzoor/Ngbede campaign organizations alleged that money was being entrusted into hands of people that could not deliver. They said the funds were diverted and it became difficult to run the campaign.
Supporters of the ruling PDP in the Benue North West senatorial zone had during a town hall meeting in Makurdi, before the presidential election, unanimously gave a stern condition that would guarantee their total support for the re-election of President Goodluck Jonathan and other candidates of the PDP, saying they would not vote for the ruling party if they were not properly funded.
Speaking on behalf of the Jemgbagh extraction, a former member of House of Representatives, Arc. Terngu Tsegba noted that “the people of the area are seriously angry because they have not been properly reached with both electoral materials and logistics.”
Also, a PDP bigwig, Elder Agber Humbe stated unequivocally that “it seems the PDP and Jonathan will lose if money is not released for campaign because we have not been properly mobilized. Government in power does not go broke, people are angry because we are not being funded and it is appearing as if the Jonathan/Sambo campaign organization wants to fail so they can establish that we supporters have failed PDP. Many people are saying they would vote for the other party for presidential election if they are not funded.”

How Buhari’s Victory, Suswam’s Defeat Weakened PDP
The presidential candidate of the All Progressives Congress (APC), General Muhammadu Buhari defeated the presidential candidate of the PDP, President Goodluck Jonathan, in a landslide victory. Buhari polled a total votes of 373, 961 to defeat President Jonathan who scored 303, 737 with a wide margin of 70, 224 in the election which held in an agrarian state that is ruled by the PDP.
Also, Suswam lost the senate seat of the Benue North East Senatorial district to incumbent Senator Barnabas Gemade. Gemade scored the highest votes of 140, 715 to defeat Suswam who polled a total votes of 118, 603 with a wide margin of 22, 112. The election was conducted in 7 LGAs out of which, Gemade won in 5 LGAs.
The senate minority leader, Senator George Akume said that the victory of Buhari is a clear expression of the feelings of the people who are liberated. He said “the victory of General Buhari is the expression of the people’s feelings because the people were aggrieved and they made a choice which was well respected by INEC.”

Ortom Defeats Tarzoor
The governor-elect, Chief Samuel Ortom of the APC polled a total votes of 422, 932 to defeat Terhemen Tarzoor of the opposition PDP who scored 313, 878 with a wide margin of 109, 054.Out of the 23 local government areas where the elections were conducted, the APC won in 14 LGAs while PDP got victory in 9 local government areas, respectively.
Surprisingly, before the results would be finally collated and announced, Suswam had called Ortom by telephone at about 10.56 am on the day of collation of results, because he saw the glaring victory of Ortom. Similarly, Tarzoor also congratulated Ortom over the victory. The Director General of Tarzoor/Ngbede campaign organization, Prof. Iyorwuese Hagher stated this in a press statement.

Need For Reconciliation
Political analysts in Benue state have insisted that there must be reconciliation of aggrieved members of the PDP. They are also of the view that both the APC and PDP members must also come together to enhance unity and development for the state.
Beyond expectation, Chief Samuel Ortom, barely six hours after he was declared winner, visited Suswam at the Government House in Makurdi. They all agreed to throw behind their disagreements. If this situation can chart a way forward for the state to enhance peace, unity and progress, only time shall tell.

Adabah VS Saleh: Case adjourned till April 16 as ‘Mad Lion’s Lawyer seeks for ‘Out of Court’ discussion

What Tom Aba told me before he died –Apostle Godshield Orokpo

What Tom Aba told me before he died –Apostle Godshield Orokpo