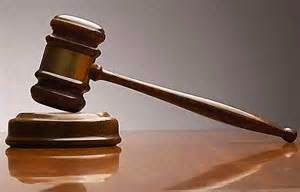 A 25-year-old housemaid, Tina Kwesi, who allegedly stole her employer’s jewellery worth N50 million was yesterday brought before an Igbosere Magistrate’s Court in Lagos. Kwesi who hails from Benue State is standing trial on a two-count charge of conspiracy and stealing.


Ishaku said the accused conspired with one other person still at large, to steal assorted gold jewellery valued at N50 million, property of one Mrs Victoria Sule.
The prosecutor stated that the accused was working as a maid in the house of Sule and she had access to where the jewellery were kept.
ALSO READ:  Court jails Andrew Odokor over internet fraud in Benue
Previous Post

Ujah on target for club

Ujah on target for club

PDP vs APC: NJC must call Justice Omotosho to order for impunity in Benue – Group

Germany crash out of World Cup