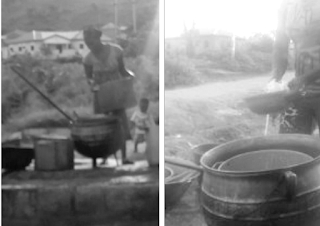 The dream of every young lady after acquiring the necessary educational qualifications is to settle down in marriage to a decent young man and build a beautiful family.

However in Nigeria today, most especially in Abuja, the Federal Capital City, the story is different as most young men approach ladies in different guises, some with the intent to get money from the lady; that is the casanovas, some gigolos, some to destroy and some for reasons best known to them.
The sad story of Miss Iveren Hemen, a single mother of one in her late twenties can best be described as a victim of circumstance. Ms. Hemen, a resident of Kubwa, a satellite town in the FCT is a graduate who studied architecture in one of the Nigerian universities.


She washes plates for operators of restaurants and serves at some occasions for survival. During a chat with Inside FCT, Ms. Hemen said, even though she did not wish to end up this way, she has to do any kind of job as long as she can get paid at the end of the day. She said, “I studied Architecture as a course in the university but you see it’s hard to find a good job.

I believe I would have gone far in my career but I was distracted when I had a child out of wedlock. After my NYSC, I travelled back to Abuja.  My parents were based in Abuja as at that time before relocating to our state of origin, Benue.Unfortunately when I got back from my NYSC, I discovered that my parents had issues and were separated.

I told myself I have to do something good for my life and that was to look for a job. Unfortunately for me, the job was not forthcoming and in the course of waiting, I met this man from Benue state, he was such a young handsome and very nice man named Andy Terseer. He agreed to pay for my rent which was about three hundred and fifty thousand naira. We quickly became friends as he was the only help I had, we attended parties, night clubs and we really had fun. He was also a good company and was there


For me any time I needed to. Many days passed and we became close friends and started dating. I already believed the man I had been praying for had arrived on a platter of gold. However, that dream got shattered as time passed.

One day, I decided to use a picture of ours, myself and his on Facebook and tagged it “this is the man of my dreams”, the post was welcomed by many likes, positive and negative comments.

A long time friend of mine, Dooshima called me on phone and asked why I was playing pranks with another woman’s husband.

I laughed and told her I was serious with Andy and that I love him and we were planning to get married. She told me he was her elder sister’s husband and advised me to interrogate him.

She said, when you meet with him today ask him who Grace and Joshua are. Behold they were his children.  I became confused and angry.

So I took a bold step that evening and asked him but he got furious and told me to stop listening to people.What else would I hear?

I had done my research some hours before confronting him and had seen his family picture that same day sent to me by my friend Dooshima, so I held him on his trousers demanding to hear the truth from him and what he intended to do thereafter.

He got so angry and slapped me. By the time I woke up I was in the hospital with a nurse. I literally passed out, that was how I discovered I was pregnant. The next day Andy came with a doctor and asked for my permission for an abortion but I refused.

I was afraid and told him I will keep the child.” Continuing, she said: “He disappeared after I gave birth but I was so disappointed because he told me he was going to marry me I had no idea he was a married man.

I share my story with you today because I have written petitions concerning him to show up and keep his part of the deal. He has promised to provide funds for the upkeep of the child but as I speak he hasn’t shown up for a long time. I am left alone to fend for my child and myself.

I am a graduate but I do small jobs to take care of the child, I am not so happy with myself because I never knew I was going to end up as a single mother after my education.

My parents are very angry with me for getting pregnant out of wedlock and they have refused to support me but I have refused to wallow in self-pity as you can see, I am hard working.

My cry is for the father of my child to support me. And I am not ashamed of doing any kind of job now to help me until I am able to secure a good job with my qualification.”