I am not after David Mark’s seat – Bukola Saraki

I am not after David Mark’s seat – Bukola Saraki 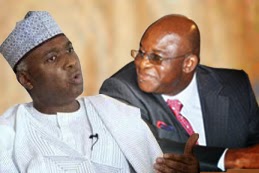 Saraki stated this at a media chat with correspondents during a trip to Ilorin, while reacting to the current political situation in the country.
Saraki made it clear that his actions and comments in the Senate now or in the future of the 7th assembly were borne out of his passion and commitment to good governance, rule of law, equity, fairness, adherence to the constitution, sustenance and protection of our democracy.

Senator Saraki explained that he would continue to speak and voice out his beliefs, opinions and thoughts and ensure that what is right, just and fair in the interest of the Senate and the nation are entrenched.
He said, “It would be unfortunate of anyone, in any quarters, to equate to the fact that I want Senator Mark’s seat. I do not want his seat, but I will not be blackmailed in not doing or saying what I feel is right, because I have been down this road a number of times while standing strong on not only what is right but in the best interest of our great country. Therefore, I will not succumb to cheap blackmail that my intent was all about naked ambition or personal interest.
“September 2011, I stood up then to demand transparency and accountability in the management of the fuel subsidy scheme, where I voiced out the ongoing massive fraud in the scheme which posed great threat to our economy. Then I was called names and told that I did not like Mr President and that it was all about 2015 election and that my figures were grossly inaccurate and no such mismanagement took place. Now the facts have shown otherwise.”
Also last year, during the PDP crisis, when some state governors and National Assembly members rose up to challenge the impunity of the then PDP chairman, Bamanga Tukur, and the running of the party, Senator Saraki and others were called names, but now they have been vindicated by the turnout of events even after they left the party.
Saraki said, “For me to dissipate my time and energy seeking Senator David Mark’s seat, with a year to election and likely possible only six months of active legislative activities, it will be illogical. But as leaders, there will be issues that I will continue to speak and stand for: what I believe is in the interest of the Senate and, in my view, the interest of our nation.”
Senator Saraki referred to the provision of Section 215 (4) of the 1999 Constitution which clearly stipulates the power and authority of a state governor as the chief security officer of the state, whereby he can give orders and instructions to the commissioner of police of his state within the confines of the constitution. “But where such commissioner of police disobeys the governor’s instructions, like in Rivers State, we cannot keep quiet because this is tantamount to the breach of the constitution.”
On the issue of declaration of seats vacant and defection of some senators, Saraki stated that the leadership of the Senate cannot and will not declare a senator’s seat vacant. This, he said, is in line with the decision taken recently by group of senators who had written to the Senate president expressing their opposition to such move. There is also, he said, a pending court action which bars the Senate leadership from taking any step towards declaring vacant the seat of any senator.
Source: Leadership