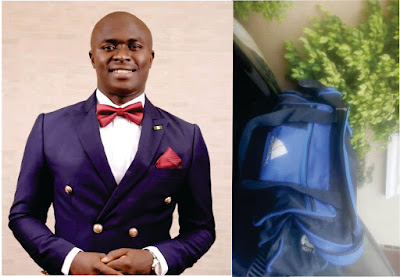 The story of Benue first comedian, Enenche Enenche is akin to that of Joseph in the bible.
The young chap had the dream of restoring hope to people through ‘undiluted comedy’.

In Makurdi, he made name for himself. He was popular, but there was nothing much to show for it.

The Ai-dogodo-borm Okpokwu LG comic merchant felt that it was time to move out of his comfort zone.

Like biblical Abraham, he moved from Markurdi to a strange land (Abuja) in 2010 to further pursue his dream and talent.

Recalling the decision that changed his life forever, the outspoken comedian said he was about to pay for his house rent then when ‘God’ told him to drop the money as seed.

From there, his story changed. Enenche is now happily married and has been leaving dream of making people happy through comedy.

He is the head-honcho of Green White Entertainment.

This is the story of Enenche Enenche as told by Enenche himself.

At times when you are tempted to complain, you just sit down and think of where grace has brought you from and you begin to thank God afresh.

I relocated to Abuja from Makurdi Feb., 2010 with all my belongings on planet earth then inside this bag and a small shuttle bag with my books. I was going to pay my rent of 200,000 when I heard a voice that the money was not a rent but a seed. I dropped it in Church and I left… the next week, my spirit told me move to Abuja. I never had the plan of moving.

I came in through NEW NYANYA MASS… I came to Abuja squatting with friends. I had three squatting points, I changed them whenever I saw I was becoming a burden…the only thing I had then was hope and faith that Nigeria has a place for me.

I was very known in Benue, and the Nite of a 1000 laughs exploits announced me, but when I came to Abuja, I forgot who I was from Benue, started afresh again.

I trekked afresh, I had a picture of the kind of audience and comedy and it was different from the conventional comedy then, so it made my assimilation into the conventional structure a bit difficult. I was not just flowing with them. I had a different burning desire in me… A desire to build something different.

I stayed off media, I never wanted media announcement…I wanted impacts announcement, so I began to build networks and contacts. I made sure I try my best to have good public relations and give a good impression on first encounter.

My first 500k deal came from a 10k wedding reception I anchored. My first 1 Million came from a 15k deal.
One of my greatest secrets is that I have never charged any church. I see the church like a place to appreciate God with the talents (but many have abused this gesture).

I am not there yet, but I am on the right path. I have been wired to look at corridor of powers in the eyes and tell them what posterity is saying.

Looking at how far God Has been with me, I refuse to complain, but to thank him for the journey so far and trust Him for where He is taking me to.
Appreciate God with me!
‪#‎aHeartOfGratitude‬
Enenche Enenche (Comedian )