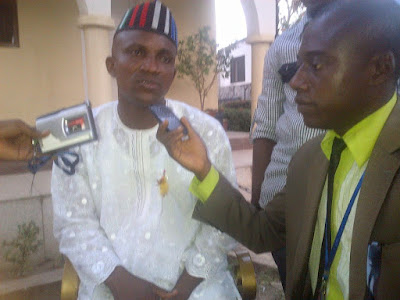 Speaking to Journalist on the 14th January, 2016, shortly after his inauguration as Ogbadibo C/taker Chairman by the Governor of Benue State, Dr. Samuel Ortom, Hon. Aba Paul has vowed to exemplified the political wills of President Buhari and Dr. Samuel Ortom.

“President Buhari of Nigeria, Dr. Samuel Ortom-Govr. of Benue State, and his Deputy, Engr. Benson Abounu, the Minister of Agriculture, our Senator to be by the grace of God-Comrade Donald Daniel Onjeh all represent the APC change mantra that is already delivering Nigeria and Benue out of the Sixteen years (16yrs) of PDP maladministration, impunity and corruption.” He said.

Thanking God for the people of Benue, Zone C, his immediate local government of Ogbadibo and his Ward-the Orokam Ward III for the rousing support given to him as seen and resulted to his appointment as C/Chairman.

Hon. Paul promised the people of his local government that this gift of trust which is largely the efforts of the Minister of Agriculture-Chief Audu Ogbe and Our Senator in the waiting- Daniel Donald Onjeh would not be tarnished or jeopardised for any reason whatsoever!

“I shall lead with the fear of God just like my Governor – Dr. Ortom; I shall be corrupt free as the APC government is known for the fight against corruption and you can see how Mr. President is keen on delivering Nigeria from the hook and grips of corrupt Politicians.

I shall carry along the council and party stake-holders to form a participatory government in our local government, this is because team work is faster and better than individual effort.

The people’s opinions I shall seek by always calling for a town hall meeting and briefing as democracy is all about the people ” He said.

Conversely, on the Benue South Senatorial rerun election, the Chairman has this to say: “zone c should brace up for victory song and dance because from the appeal court verdict that nullified the election of Senator David Mark due to unethical conduct and malpractices, I knew there will be nothing stopping the victory of the youngest Senator – Daniel Onjeh who is like the young Biblical David that killed the strongest and older Goliath. Ogbadibo like as you can see from our visit to Oju and Obi Local govts are very prepared to give Daniel Onjeh all their votes with no reservation; and this is also what will happen in all the Nine local governments of zone c. So there is no need to be worried, God has already crowned Daniel Onjeh and the APC.”

Reacting positively to the directive of Dr. Samuel Ortom that all Chairpersons should live within the. Local government head quarters, Hon. Aba Paul said that is the right thing to do, and that afteral he is already living within the headquarters and as such, the gift of trust given to him now by the Ortom’s administration would be carried out successfully by the grace of God almighty.