‘If she touches you, your money will disappear’ – Magic woman nearly beaten to death in Benue community (PHOTO)

‘If she touches you, your money will disappear’ – Magic woman nearly beaten to death in Benue community (PHOTO) 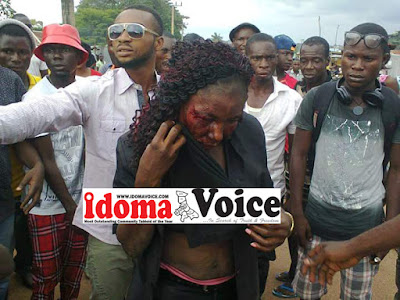 A Woman (names withheld), believed to posses spiritual power was nearly beaten to death after she was arrested by youths in Tomayiin Market in Katsina-Ala Local Government Area of Benue State, IDOMA VOICE reports.
According to a citizen reporter, the woman is believed to have spiritual power that whenever she touches anyone, the person’s valuables will disappear.
The source said, “Whenever she sees anyone for the first time she will greet the person by his/her name and relate as if she knew the person before.
“But if she eventually touches you the whole money you have on you will disappear. But however Luck run out on her as she mistakenly touched the wrong Person and she was caught and given the beating of her life by angry mob.”
IDOMA VOICE gathered that the woman was handed over to the Police in Katsina-Ala for further investigations.