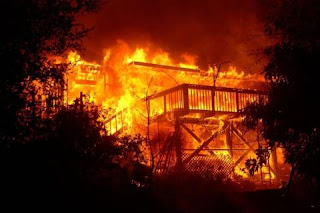 It was all tears and pains on Monday in Otukpo, Benue State when fire gutted the main market, thereby making traders to lose goods worth several millions of naira.

According to reports, the fire, which started in the evening, was said to have destroyed several shops, where rice, boxes, onions and other assorted products were sold.

Mr John Okoh, Chairman of palm oil traders at the market told newsmen that the major reason the fire spread to other shops was because of the closeness of the shops to one another, which he said made it difficult to put out.

Mr Okoh said the local government should strive to broaden the passages in the market, such that it would be possible for vehicles and people to move easily to salvage the situations instead of just coming to the market to collect tax.
Also speaking, Hon Innocent Onu, Chairman of Otukpo Local Government Area, said over 15 shops were burnt during the fire incident. He however assured that functional fire service station would soon come to the capital of yet to be created Apa just as he’s efforts are being put together to improve on the narrow routes in the market to avoid future occurrence.