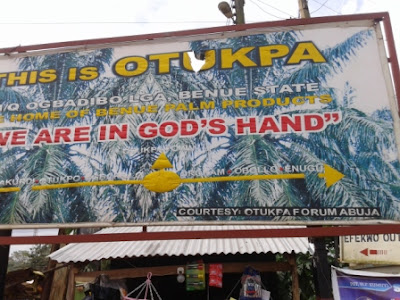 Three men; Oono, Oodo Ogodo and Ameh Ochagbaha coming from diverse directions insearch of fortunes converged at a spot popularly known today as Oto. The men entered into a pact to stay together and forge their fortunes forward collectively.
They decided on a suitable name for the area known today as OTUKPA. The original name ‘Otuba’ which means “to gather or together” points to significant elements of unity among them.

Anthony Inedu Ijika Akoto in his book titled ‘ The Making of Otukpa Land’ has the following to say about the name OTUKPA; ‘ While writing on the etymology of the name “Otukpa” the works of Captain G.D.C. Money plays a pivotal edifying role. According to Money, Otukpa was formed from two Idoma words: ‘Oto’ a name of a village in the then settlement and ‘Ukpa” a sacred plant believed to contain medicinal properties and healing powers.
It was in the mist of the plants ‘Ukpa’ in a village called ‘Oto’ that the elders of the three clans Ai-Oono, Ai-Oodo and Ai-Ochagbaha had a convent and pact of love, friendship and defence. Oto and Ukpa became so symbolic among the people, hence the name ”Oto Ukpa” was combined to form OTUKPA’
Early Settlement
The Ai-Oono, Ai-Oodo, Ai-Ochagbaha clans who occupy the area known today as Otukpa have had and practiced communal life system since their arrival to the present Otukpa. The clans occupy a portion of the present otukpa.The clans occupy a portion of the waterless ridge of hills which form the south –western portion of the Idoma division. The language of the people is Idoma.
The whole area hitherto full of forest has gradually deforestated so as to give way to agriculture to support the increasing population. The only forest reserves in the vicinity of the villages are retained for purpose of defence, game and worship of deities. The communities live in compounds, each extended family occupying a separate stead.

Otukpa is the largest district in Ogbadibo local government area of Benue state, and shares common boundaries with the following neighbors: Owukpa and Orokam to the south, Olamaboro to the north –west, Okpoga to the east and Edumoga to the north. It lies between 7 35 and 7 45 East longitude, 7 05 North latitude and   covers an area of 168sq.kms. It stands at height of 1200ft above sea level, on a ridge of sandy hills which stretch north to Nsukka. Apart from the extreme east of the area, there are no streams or other water source. Hence the majority of the people go in search of water up to six kilometer from their homes. The hills form the main water shed between the Niger and Cross River streams , rising on eastern slopes , flowing into the Bansara creek of the Cross River and thus rising on the western slope into Anambra creek of River Niger .

Otukpa can be reached from both north and south by the Federal Highway A3, Enugu –Makurdi road, and it is also the junction of Ajaokuta-Otukpa Highway A237. Like any other settlement in Nigeria, Otukpa experiences two seasons every year, i.e. rainy and dry seasons. The precipitation ranges between 1,200mm to 1,400mm per annum with two peaks, June to July, and September to November with a dry spell in august.

It has a good climate generally cool with temperature of 20 centigrade in July rising up to 30 centigrade in March, the hottest, month. The area is covered with tall, scattered trees, palm trees being the dominant vegetation .Otukpa is made up of many villages. The federal high way Enugu – Makurdi passes through it, almost dividing it into two halves. According to the national population census figures of 1991,Otukpa has an estimated population of 60,000 people. Farming is the dominant occupation of the people, while palm oil production and palm wine tapping are prominent among the people.

They produce the highest quantity and best quality of palm wine in Benue state. Otukpa is also endowed with the raw materials for producing iron ore. Looms for smelting iron kilns were found when the colonial masters visited the border between Orokam and Otukpa between 1934/35.The Edumoga people , who are experts on the jobs were hired too smelt the iron ore for them , which they used to fabricate their farming implements and weaponry.

One dead, 9 missing as flood sweeps 10 persons in Benue

One dead, 9 missing as flood sweeps 10 persons in Benue