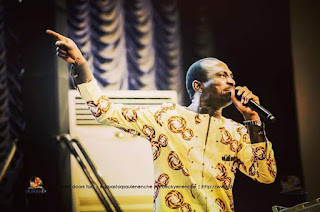 The Senior Pastor, Dunamis International Gospel Centre (DIGC), Abuja, Dr Paul Enenche, has declared that it was high time people started defending themselves against those killing people in Nigeria either in the name of politics or religion.

The fiery preacher affirmed that people would no longer fold their arms and watch others maim and waste them for no reason.
He gave this message barely 24 hours after pouring out his heart on the senseless killings of Nigerians in Benue, Taraba States and other parts of the country.
Speaking on a Friday evening service monitored by IDOMA VOICE, the cleric backed his call for self defense from both the bible and the Nigerian constitution.
He recalled how God humbled former Libyan dictator, Mummar Gaddafi when he tried to call for the disintegration of Nigeria some years back.
His words, “It is time for us to pray to God to whom vengeance belongs to show himself in Nigeria.
“One of the greatest challenges that can happen on earth is the challenge of ignorance.
“I am sure you are aware of what I may call the war of attrition from a certain select group of people that want to relentlessly and continuously attack and weary communities into submission in Nigeria.
“But I announce that anybody who is interested in the destruction of Nigeria, destruction shall never leave his generation.
“Whoever and wherever that person is, either in this nation or outside this land because our history told us that nobody ever interested in the destruction of Nigeria ever survived.
“I know of a man called Gaddafi (of Libya), who about the years 2010/2011 was dictating what should happen in Nigeria.
“At a point, he suggested that Nigeria should be divided along religious line.
“And there seemed to be suggestions that he had a hand in what was happening in the nation as at then – to destroy lives.
“But the question is, where is Gaddafi and his generation today?
“I say this as a signal to anybody across the length and breadth of this nation that anyone interested in the wastage of Nigeria, may God waste him and his generation.
“In Benue, just yesterday, about 75 people were given a mass burial because of some satanic vagabonds but enough is enough.
“Let me say two things before we pray because we have a high level of ignorance.
“Nobody has the right to take another man’s life either it is in the name of religion or politics, or cultism. Under
Our constitution, the right to life is guaranteed under section 33 sub section 1 of the 1999 constitution as amended.
It says, “everybody has the right to life and no one shall be deprived intentionally of his life safe in execution of the sentence of a court in respect if a criminal of which he has been found guilty in Nigeria.
“I announce that anybody wasting lives in this nation, the same way shall his generation be wasted.
“Now, hear this, whatever a person does to prevent himself from being killed is not an offence. It is in the constitution.
“Section 59 of the penal code says, nothing is an offence of which is done in the lawful exercise of the right of private defense.
“Also, section 60 of the penal code provides that;
“The right of private defense extends to;
(a) the defense of his own body and body of any other person against any offense affecting the human body.
(b) the property either movable or immovable of himself or of any other person against any act which is an offence under the  definition of theft, robbery, mischief or criminal trespass or which is an attempt to commit any of those offences.
“In other words, it is not an offence for someone to defend himself or another from being killed.
“So what is the useless nonsense about those who think they have the claim to take life at will and go unarrested and unharassed. The end of it has come. Enough is enough.


Lets back it up from the bible.
“Gen 9:6 says, who Whoever sheds man’s blood, By man his blood shall be shed; For in the image of God He made man. so sheeded man’s blood by man.
“Meaning the killer is qualified for killing.
“That action is not an offence because he came to finish people and the people  gathered and finished him. Those people did nothing wrong.
“Exodus 22:2 summed it up thus: If a thief be found breaking up, and be smitten that he die, there shall no blood be shed for him.
“Whoso diggeth a pit shall fall therein: and he that rolleth a stone, it will return upon him.
Proverbs 26:27.
Also in Rev 13:1 “He that leadeth into captivity shall go into captivity: he that killeth with the sword must be killed with the sword. Here is the patience and the faith of the saints.
Did you read what the penal code said, “you are entitled to defend yourself and another person around, against attackers, and you want to watch them waste your wife and children?
“They went into one house, pulled down everybody, ripped woman’s pregnancy open, plucked out the  eyes of a little boy and left him alive with the two eyes plucked out. Enough is enough.
“Let’s look at what Jesus said about self defense.
“Matthew 26:51-52. And, behold, one of them which were with Jesus stretched out his hand, and drew his sword, and struck a servant of the high priest’s, and smote off his ear. Then said Jesus unto him, Put up again thy sword into his place: for all they that take the sword shall perish with the sword.
“From what we read, are you not surprised a disciple was following Jesus with a knife?
“Jesus never asked him to throw away the knife, Jesus never questioned him how he got the sword, Jesus was never surprised that his own disciple was going about with him with a knife. He didn’t tell him, why go about with a knife, don’t you believe in prayers?
“Dont be deceived, everything people need is in the Bible.
“I thought Jesus would be surprised seeing his own disciple carrying a knife, but rather, he told him to keep the knife back, for this occasion I am meant to die. He said don’t use it now, keep it back because you may need it later
“And i am not asking you to use it to fight or attack people, but in case they come near you…
Also in Luke  22:35-36 “And he said unto them, When I sent you without purse, and scrip, and shoes, lacked ye any thing? And they said, Nothing.
“Then said he unto them, But now, he that hath a purse, let him take it, and likewise his scrip: and he that hath no sword, let him sell his garment, and buy one.
It means a time will come when the sword would be more important than the garment.
“Let me make this clear, there shall be no war in Nigeria but no demonic vagabond shall take anybody for granted in this nation anymore. Enough is enough.
“I don’t want to be misunderstood, no Nigerian more patriotic than us. We have been praying for this nation and we won’t stop doing that.”