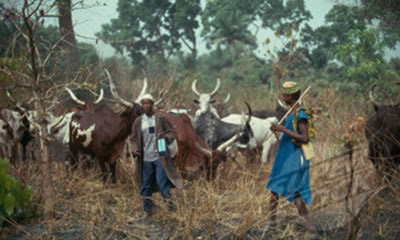 Some suspected Fulani herdsmen yesterday stormed Yogbo village in Guma Local Government Area of Benue State and killed no fewer than nine people. Apart from injuring many others, the attackers also set several houses ablaze.
Sources told National Mirror that the attack was one of the several coordinated violence in recent times in Guma and Gwer-West local government areas. The attack followed the renewed hostilities between Fulani herdsmen and Tiv farmers over alleged destruction of farm produce by the former.
A source at Yogbo, who preferred not to be mentioned, said that the Fulani herdsmen had at different times invaded villages in the two local government areas to kill innocent citizens and destroy property.
The source said: “Take yesterday’s attack for instance, the Fulani herdsmen mobilised themselves and stormed the village by 12 midnight when everybody was asleep. “The herdsmen started sporadic shooting and burning of houses, which led many villagers to scamper for safety.
“As fire and smoke pervaded the environment, the situation became tense.” Several efforts to contact the Guma Local Government Area Chairman, Hon. Usa Adi, failed as his mobile phone was engaged after several trials.
When contacted, the Benue State Police Command Public Relations Officer, Mr. Daniel Ezeala, said that he was yet to be briefed. Ezeala, however, pledged to investigate the incident with a promise to arrest the perpetrators for prosecution.
Previous Post