by Ben Idah
in Nigeria News

A meeting of governors of the 19 Northern states with chairmen of the state traditional councils and Secretaries to the state Governments is taking place this evening in Abuja to brainstorm on critical issues affecting the development and growth of the region. 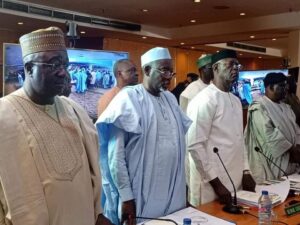 The September 12th 2022 meeting, which was shifted from Kaduna, the political and administrative headquarters of the North is being held at Transcorp Hilton Hotel, Abuja.

The meeting, which is presided over by the chairman of the Northern States Governors Forum, and Plateau State governor, Simon Bako Lalong, received updates on issues such as the Northern Nigeria Renewable Energy Project, the National Livestock Transformation Plan (NLTP), the Livestock Productivity and Resilience Support Project (L-PRES) and the Kaduna Textile Limited.

In addition to discussing the worsening security situation in the region, the meeting also received presentations from the Northern Traditional Council, the World Bank support for “Nigeria for Women” Project and the World Bank for AGILE Project.

A communique is expected at the end of the gathering.

You are not my doctor, I am fit to rule Nigeria – Tinubu fires back at Peter Obi

You are not my doctor, I am fit to rule Nigeria - Tinubu fires back at Peter Obi