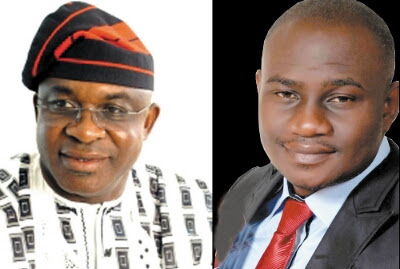 The National Assembly Election Petition Tribunal sitting in Makurdi on Wednesday admitted four exhibits from the subpoenaed INEC witnesses in the suit filed by Mr Daniel Onjeh of the APC challenging the return of Sen. David Mark by the INEC.

The News Agency of Nigeria (NAN) reports that Mark, a former Senate President, was returned winner of the Benue South Senatorial elections held in April by the Independent Electoral Commission (INEC), having defeated his only rival, Daniel Onjeh of the APC.
At the resumed sitting, Mr Yakubu Nachamada, one of the witnesses from INEC identified five documents which Onjeh sought to tender but the PDP’s counsel, Chris Alechenu, objected to the admissibility of one of them.

Alechenu premised his rejection on the grounds that the document did not originate from the party seeking to tender.

NAN further reports that the document in contention is a letter dated July 27, 2015 authorizing the INEC staff to be a witness in the suit.

Alechenu averred that the letter could only be tendered in evidence either through the INEC Chairman, the Resident Electoral Commissioner or the author of the letter, insisting that the witness was neither of them.

” The witness is not the author, addressee and is not even copied the letter, so, the letter cannot be tendered through him,” adding that it was not even an authorization for the witness to testify in the matter.

In his arguments, Mr Kenneth Ikoni, counsel to Mark, collaborated the views of the PDP counsel and urged the court to reject the admissibility of the letter.

Onjeh‘s counsel, Tunji Oso, however, urged the court to discountenance the objections raised by the respondents’ counsel, saying that the document was relevant and sufficient to link the witness to the evidence relating to his relevance in court.

Citing the Nigerian Weekly Law Report, page 17 (G-H) he averred that “a document linking a witness to an evidence can be tendered with or without the consent of the author or addressee”.

The Chairman of the Tribunal, Justice Mosumola Dipeolu, ruled that the document was very vital as to the appearance of the witness in court.

Dipeolu therefore, overruled the objections of the two counsel and admitted the document into evidence as exhibit PA.

NAN also reports that the Card Reader Accreditation Data in respect of the election for all the polling units in the senatorial district generated from INEC website and presented in court by Nachamada were admitted in evidence.

Another exhibit admitted in evidence was the receipt for certification of documents, however, the court refused another application by Oso to tender the subpoena by the Tribunal for the two witnesses from INEC to testify in court.

Earlier, counsel to the PDP, urged the court to reject the admissibility of the order on the grounds that it was already the document of the court, stressing that the court had no need for it in evidence.

Tribunals chairman, Dipeolu, agreed with the respondents’ counsel and rejected the admissibility of the subpoena order in evidence.

The case was therefore, adjourned to July 30, 2015 for continuation of trial.