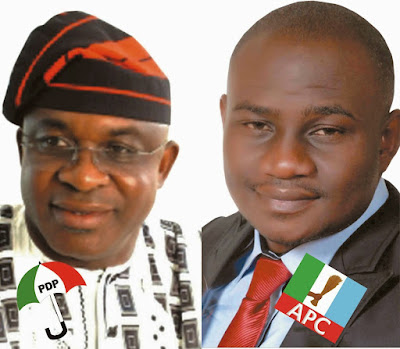 In every society where leadership positions abound, it is customary for the people to judge their leaders by performances. While some may be satisfied, others definitely will be disgruntled. If you are a leader and you are not criticized or hated by a section of your followers, then you are yet to be a leader. History has shown that great leaders are the ones that suffer more persecution.

Even Jesus Christ suffered persecution and condemnation among his people. Unfortunately, they got to know His worth after He was gone; that He is indeed ‘THE MESSIAH’. Most times, people depose their good leaders as a result of their actions and inactions and then suffer the consequences thereafter.
Divergent opinions have continued to trail the choices that lie before us as a people. It is like choosing between the devil and the deep blue sea. Ironically, the devil you know is better than the angel that you do not know. Of course, Onjeh and Mark are equally sons of the soil but to everything, there is a time and season.
Yes, David Mark might not be the best option as perceived by many, but to a larger percentage, he is closer to the best considering the ferocious quest for the emancipation of the Idoma nation, which he has continued to champion. No doubt, he will have to pass the baton someday, but is Onjeh better positioned and prepared to carry on with the race? If Mark is such a bad leader as those that have continued to engage in calumnious campaigns portray him, why then are the Tiv people who consider the Idoma nation as “Benue Minority” perpetually at their mercies, like never before, poised to wrestle him from power even though he is only representing the people of Benue South?
I see their uncharitable campaigns as not only untrue and diversionary but scurrilous and malicious and a calculated attempt to sabotage our collective struggle for the Idoma soul. I see this contest however, as not a fight between Mark and Onjeh, but a fight between Mark and other external forces both at the State and Federal level that are threatened by his continuous relevance in our polity.
Why was Governor Ortom too quick to set up committees that will look into the marginalization of the Tivs at the national level even when our people are being relegated in his government? It is glaring that Mark’s counterparts could not wield his level of influence and relevance else, we would have still remained in political oblivion at the national sphere; a development that has continued to be a thorn in the flesh of our detractors.
Why was the APC government in the State too quick to take away the position of the Secretary to the State government, even when it had remained our peoples’ mandate since this democratic era? Why did they conspire with our own representatives to take away the position of speakership of the State House of Assembly even when it appeared we would have had it? Why are prominent Idoma sons being asked to proceed on retirement even when their service years have not been exhausted? It is true that Apa State was not created. Same way no other new State was created. So why should that be used against David Mark?
His influence attracted more federal appointments and recognition to our people than any other minority tribe in this country. For those that have being hypnotized into believing Mark has achieved nothing, it is pertinent to note that Senator Mark’s achievements in Idoma land for the past sixteen years far outweighs the achievements of his counterparts from the other Zones of the State put together.
Have we asked ourselves if they performed better than Mark? What about his contributions to the educational, entertainment and sports development of our Zone? What about the National Open University study centre in Otukpo? What about the annual Mark D’ Ball event? What about Apa United football club? What about Joy FM? What about the Otobi Water Dam and the Oweto/Loko bridge? This election brings us face to face with our collective determination and identity pursuit and we must be very cautious of our judgment and choice come February 13, 2016 less we shoot ourselves on the foot, like the biblical Esau who sold his birth right for a pot of porridge. The people of Benue South must be left alone to decide who represents them in the Senate.
Senator Mark is one of the best things that has happened to the Idoma nation. He is a jewel that is priceless.
He is a force and will be a clearer voice and a better representative of Idoma nation that is already marginalized in the State. A man of his qualities and credentials may not depend on party affiliation, to soar, considering his wealth of experience, sense of maturity and clarity of purpose. He has indeed proven to the whole world that he is a political juggernaut, a stabilizer and a leader. In the nearest future, his representative policies will have resounding impacts that will restore our collective glory. Only then, shall we realize that it was better to have had a leader like him than not to have had him at all.
It is on this note that, I follow in the lead of the Ogigo Mebe Ki’ Idoma, Most Distinguished Comrade Abba Moro to appeal to our people not to be deterred or swayed by the antics of our detractors. Let us allow Senator David Mark serve this term in the Senate.