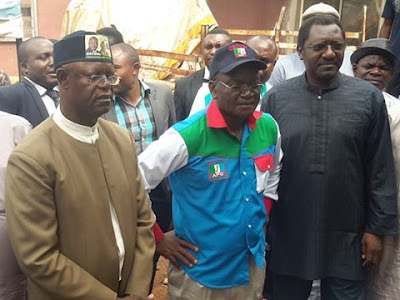 Apir gave the advice in an interview with the News Agency of Nigeria (NAN) on Thursday in Makurdi.

He said that if not sacked, such office holders would clog the wheel of progress.

According to him, such cabinet shake-up will inject vibrancy in government, stimulate economic growth and enable political stability.
He expressed the regret that most sensitive political positions in the state were given to people with neither requisite knowledge nor experience in the portfolios assigned to them.

Apir said crucial economic decisions affecting the future of the state were left in the hands of inexperienced political office holders who conducted them without recourse to professional advice.
The consultant suggested a workable economic plan that would stimulate growth by encouraging the spread of cottage industries based on the availability of local raw materials.
Apir also suggested the establishment of an industry around the Makurdi axis that could encourage the commercial production of sesame seed in the area.

“This state could also leverage on its huge endowments in citric fruits along Ushongo, Gboko and Kwande axis and large palm oil plantations in Idoma land to generate huge revenues.


“All that is needed is to identify these areas of comparative advantage to invest into and encourage processing of such raw materials to rake in revenue for the state.
ALSO READ:  Ortom presents official vehicles to legislative leaders of LGC’s

“Benue has no business with poverty. In fact, there is no reason not to pay workers their salaries; none whatsoever,” the consultant said.

He said that paucity of ideas from such political aides was stifling the states’ economic growth.
Apir, therefore, advised Ortom to ensure excellence in his administration for the purpose of achieving optimal results.
He said the governor was not disclosing exact revenues generated internally by the state revenue board and the true wage bill of the state.

The consultant cited the report of a probe panel set up by the governor.

Apir said that under Gov. Gabriel Suswam, the state wage bill was N2.6 billion and wondered the sudden escalation of the bill to about N4 billion; without additional staff recruitment.