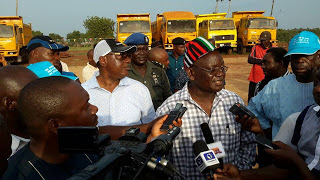 The All Progressives Congress, Benue State chapter has once again sounded its trumpet of numerous achievements in the state since assuming power on May 29 2015 in the state.

The party in a statement by its chairman, Abba Yaro claimed that what it achieved in 100 days has surpassed what the position PDP did in its 16 years of leadership in the state.

The party voiced its conviction in  a statement thus:

The attention of the All Progressives Congress, APC, in Benue State has been drawn to publications credited to the People’s Democratic Party, PDP, in the state that Governor Samuel Ortom was erasing the legacies of his predecessor. We find these allegations petty, baseless, and unfortunate.

The APC administration of Governor Ortom does not need to and has not embarked on a contest of legacies with the previous one. Within one year in office GOVERNOR Ortom has embarked on over 1000 projects in various sectors through ministries, departments and agencies.All these and several others yet to come are more than enough milestones to immortalize him. As an experienced public servant  at the local government, state and federal levels where he became a member of the Federal Executive Council as a Minister he knows that government is a continuous process.

As such he has pledged to complete projects started or abandoned by his predecessors and matched action with words by investing scarce resources on resumption of work on 11 road projects, New House of ASSEMBLY complex and rehabilitation of the old one, New Deputy Governor’s office complex, the Cancer Screening Centre, Entrepreneurship Development Centre, to mention a few.

Governor Ortom has also consolidated on the foundation laid by his predecessors at the college of Health Sciences of the Benue State University by ensuring it’s accreditation and subsequent graduation of medical doctors who had stagnated at the institution for more than a decade. From the forgoing it is baseless to make spurious allegations that cannot be substantiated.

More baffling is the claim that Governor Ortom would condescend to ordering the removal of plaques, photographs and road signs. How ridiculous. This is certainly over stretching partisan more so that the allegations are false and unsubstantiated. For instance the portrait of Governor Suswam can boldly be seen displayed at the New Banquet Hall of the Benue People’s House among those of all the other chief executives of the state. It has never been removed at any time.

The inscription of Senator Dr George Akume way still remains at both the Balcony and Terwase Agbadu ends of the road. All those interested can confirm the above. If it is true that the plaque at the Benue State University Teaching Hospital has been tampered with, investigation should be conducted into who did it and when. Putting the blame on Governor Ortom is as petty as it is baseless. Certainly he would not contest with his predecessor to be guests of the Economic and Financial Crimes Commission, EFCC, and to be member of his group that looted and plundered the State.