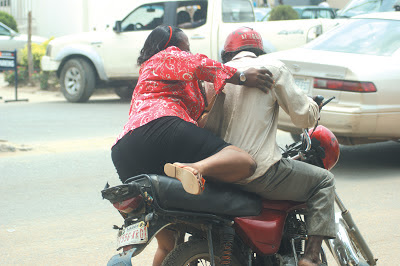 The men of the Nigerian police and Army have ignored the ban of commercial motorcyclists, popularly called Okada in Makurdi, the Benue State capital and other major towns from 8pm to 5am.

The newly deployed commissioner of police in the state, Mr. Adams Audu, had, a week after his assumption of duty, reiterated the okada ban by Governor Gabriel Suswam and said that the development was in accordance with the current security measures by the police to maintain law and order and reduce the wave of criminal activities.
However, it was observed that men of the police and army have shunned the order by Governor Suswam and the commissioner of police and are freely using their motorcycles and conveying commercial passengers at nights. It was observed yesterday that armed policemen stationed at various check points during the nights, including Tito gate, Wurukum, Modern market and Ankpa quarters areas, and saddled with the responsibility of checking all passing vehicles, allowed the personnel to drive past their stations, without any proper check.
This is coming barely two weeks after the Benue police command had arrested one Samuel Chukwu near NYSC secretariat where he and one other persons (now at large),posed as passengers to one Jerry Kawachia of University of Agriculture Makurdi and attempted to snatch his vehicle using a sharp bladed knife. Members of the Benue State Motorcycles Hire Association (BEMOHA) in Makurdi and its environs said they had heeded the order to stop operating at night as law abiding citizens – See more at: http://leadership.ng/news/240613/police-army-officers-shun-ban-okada-benue#sthash.QBnKpOmc.dpuf
Previous Post