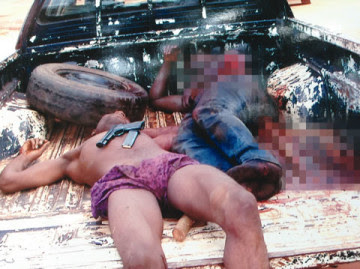 Two members of a kidnapping and armed robbery gang have met their waterloo in an encounter with the police in Enugu.
The spokesman of the Enugu State police Command, Mr. Ebere Amaraizu, said the two hoodlums are indigenes of Gboko in Benue State.
While one of them, Sheeshor Nyoroku, died in the encounter with the men of the Igboeze South Division of the Enugu State Police Command on June 11, 2015, the other one, Terser Nyor, was critically injured.
Our correspondent gathered that the hoodlums and their gang members had been terrorizing the inhabitants of the Igboeze area of Enugu State. But they ran out of luck ran out on the fateful day, when they stormed Amube, a village in Enugu-Ezike, in a bid to kidnap a Malaysia-based businessman, who was erecting a building in the community.
ADVERTISEMENT
It was gathered that when they could not find the businessman at the site of the building, they snatched a Toyota Camry vehicle, with registration number LSD 895 DL, from the businessman’s friend, who was at the location at the time of the planned kidnap.
But, as they escaped from the village, the gang was ambushed by the police at the Iheaka axis of Igboeze South. In an ensuing gun battle, Nyoroku was killed on the spot, while Nyor was wounded before he could escape into a nearby forest.
The police, in company with members of the neighborhood watch, combed the forest, where Nyor was arrested.
A berreta pistol with five rounds of live ammunition was found on him.
Amaraizu said Nyoroku’s remains had been deposited in a hospital while Nyor, whose condition critical, was receiving treatment.
The police spokesman added that Nyor had given useful information on the criminal activities of the gang.