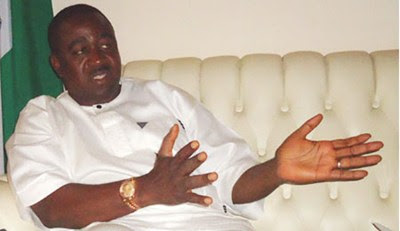 Benue State Com­missioner for Trade and invest­ment, Dr. Tersoo Kpelai has debunked the claim of former Governor, Ga­briel Suswam that he was harassed by hoodlums at Ukum Local Government Area of Benue state.
The commissioner who doubled as the Chairman Central Planning Com­mittee for the burial of the paramount ruler of Ter-Ukum, Chief Daniel Dzahan who was buried in the area explained that the burial essentially was non- partisan.
He explained that few people were initially billed to give funeral oration at the programme and that Suswam was not on the list of those to speak at the occasion.

He further stated that “soon afterwards, the former governor, Dr. Ga­briel Suswam arrived the venue with his lieuten­ants and a detachment of Mobile Police and other entourage he insisted to make a speech”

“Since his name was not among to speak, it was initially rejected but due to the pleadings of tradi­tional rulers of the area and other sympathizers, he was allowed to make a speech”
“Soon as he mounted the podium, he started with vulgar language and subsequently confusion set in and at that point I left the venue .
“For anyone to allude that the occasion was dis­rupted by party support­ers is not true”
“Frankly speaking, those who are insinuating that there was political clash between supporters of different political par­ties at the occasion are not saying the truth and there is no iota of truth whatso­ever in that .
“ I wish to disabuse the minds of the people that the insinuation is borne out of envy and misrep­resentation of facts”, he explained.