by Treasure Orokpo
in World News

The Prince of Wales, the Queen’s eldest son, has become the new monarch, King Charles III. Buckingham Palace said in a statement: “The Queen died peacefully at Balmoral this afternoon. 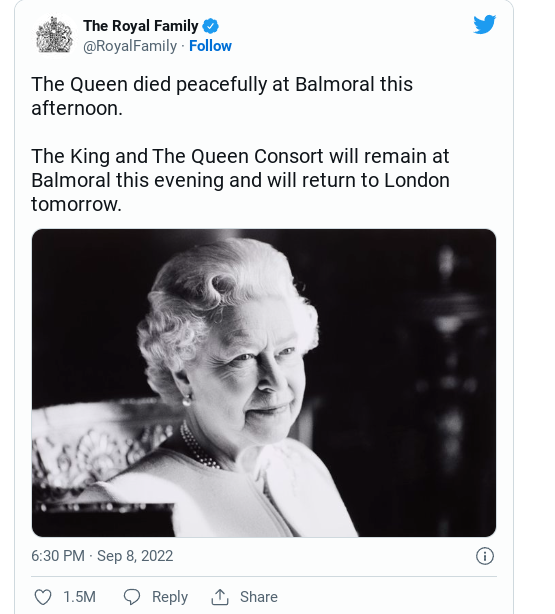 This online newspaper understands that Britain was in mourning after her death, which marks a watershed moment in the life of the nation, ending a reign that spanned 70 years.

The King and The Queen Consort will remain at Balmoral this evening and will return to London tomorrow.” Senior members of the royal family had travelled earlier in the day to be with her at Balmoral, the Queen’s castle in the Scottish highlands, while at Westminster the mood among senior politicians was sombre.

The Queen celebrated the 70th anniversary of her reign this year. She had represented continuity and stability for Britain from the postwar era into the 21st century.

The country was braced for the death of the monarch on Thursday morning when Buckingham Palace issued a rare medical bulletin on the Queen’s health. The BBC suspended normal programming. Earlier this week, the Queen, who had suffered from mobility issues for some time, oversaw the transition of power from Boris Johnson to new prime minister Liz Truss from Balmoral instead of travelling to London.

The news of the monarch’s condition was relayed to Truss in the House of Commons shortly before midday, as she made a statement to parliament on a state intervention in the energy market. The Queen had been a central part of life in the UK for seven decades, since the death of her father George VI in 1952.

She took the throne when Winston Churchill was in Downing Street and this week invited Truss, the 15th prime minister of her reign, to form a new government. Her reign encompassed the decolonisation of much of the British empire in Africa and Asia, as well as the consolidation of the Commonwealth.

It also saw the emergence of the modern monarchy, which became the subject of intense media scrutiny. The Queen’s personal popularity was seen as a key factor in maintaining support for the monarchy in the UK in recent years. She shied away from political interventions and was known chiefly to her subjects by her presence at public events and televised Christmas messages, which often emphasised the values of duty and dialogue.

She became the longest-serving monarch in British history in 2015, surpassing her great-great-grandmother Queen Victoria.

Is Queen Elizabeth dead? What you should know

Is Queen Elizabeth dead? What you should know