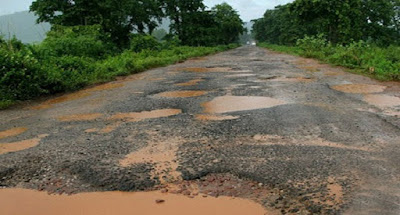 CONSIDERING the fast approaching Yuletide season when roads become busier, the House of Representatives has urged the Federal Roads Maintenance Agency (FERMA) to urgently undertake repairs of the damaged portions of the Makurdi-Gboko-Katsina Ala expressway and erect road signs at dangerous curves and bends.

Adopting the prayers of a motion without debate, the House that decried the deplorable condition of the road yesterday at plenary also urged FERMA to install speed breakers at necessary points to forewarn road users.

The parliament similarly urged the Federal Road Safety Commission (FRSC) to ensure that strict parking laws are adhered to by trucks of the Dangote Cement Company site where big trucks abandoned, constitute danger on the highway.
Sponsor of the motion, Dickson Tarkighir had told the House that the 110kilometres road linking Makurdi to Katsina Ala Local Government Council traversing Guma, Tarka, Gboko and Buruku Local Government Councils is a busy route to access several parts of the country.
Tarkighir added that the road has become a death trap, claiming many lives due to its deplorable state with potholes dotting the stretches.
Speaker Yakubu Dogara, who presided over the session, referred the motion to the House Committees on Works. FERMA, and FRSC for further legislative action.
Similarly, the House yesterday urged the Federal Government to appropriate money in the 2016 budget for the dualisation of the 9th Mile Corner-Obollo-Afor-Makurdi road.
While mandating its committee on FERMA to ensure that the agency carries out urgent rehabilitation works on the failed portions of the road pending its dualisation, the chamber yesterday also mandated the committee on Legislative Compliance to monitor compliance to the resolution.
In a related development, the House of Representatives yesterday called on the Federal Ministry of Power, Works and Housing to carry out a reconstruction of road from Yahe-Ukelle in Yala Local Government Area of Cross River state to Igede in Oju Local Government Area of Benue state with a view to saving same from total collapse and easing the suffering of the people.
This followed the adoption of a motion introduced by Jarigbe Agom Jarigbe, who expressed concern that the deplorable state of the road is affecting commercial activities between people of the two states, as, according to him, it is now unsafe for inter-state traders and commuters to travel through the road.
The motion was referred to the committee on works for further legislative in
put.