Save us from Fulani Herdsmen -Benue monarch begs

Save us from Fulani Herdsmen -Benue monarch begs 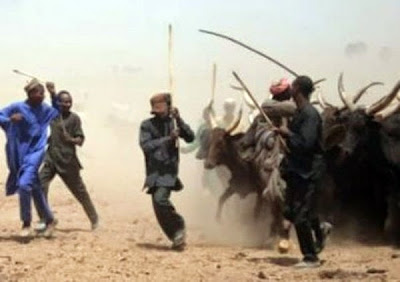 The newly appointed Tor Lobi,and former Director General,Chief Moses Anagende has decried the increasing wave of attacks by the Fulani insurgents on the Tiv communities in Benue state.
Speaking during a courtesy on him by the Ipusu community Makurdi,Chief Anagende said that the development was capable of causing famine in Tiv land since Tiv farmers were no longer engaging in farming activities.He called for collaborative efforts in tackling the menace.
Chief Anagende also acknowledged the contributions of the Ipusu community Makurdi who according to him have contributed immensly in the stability and peace within and around Makurdi,the state headquarters of Benue state.

Responding to an earlier request by the president Generalof Ipusu community MAkurdi,Capt Dominic Agberifan for the appointment of Ipusu sons as traditional rulers within his domain,chief Anagende promised to look into the matter along with other Chiefs towards solving the problem.
Senator Fred Orti in his remarks thanked the Ipusu people for their early visit to express their solidarity with the Tor Lobi,chief Anagende over his elavation,and called on the Ipusu community Makurdi to support him succeed in his new responsibility.

He said the court case instituted against the Benue state government and the Tiv Area traditional council was an academic exercise in futility unless another bill is initiated to repeal an earlier one enacted by the Assembly
The heavily attended solidarity visit to the Tor Lobi in president generals of MINDA,Ipusu,as well as Nongov development Associations,Hon Dave Iorhemba,Mue Uter of Kyondo Usha ,Wailamayo,Genabe among others.