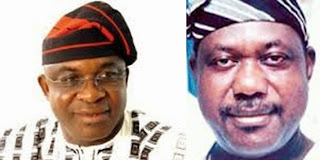 Political leaders from Benue State led by former Minister of State for Niger Delta, Hon. Sam Ode under the aegis of Benue Rebirth Initiative have appealed to the Senate President,  Sen. David Mark,  to support the candidature of Sen.
George Akume, in his desire to be Senate President.
The group which made this call in a communique issued at the end of their inaugural meeting which held in Abuja yesterday and signed by Sam Ode and Arc. Joe Ikyaagba,  said they had identified the key issues which have continued to drag the State backward particularly at the national scene where an average Benue man sees his fellow brother as an enemy and wished to appeal to all stakeholders to sheathe their sword and embrace unity and oneness of purpose.

Calling on Mark to take a clear stance on the senate presidency, the group also acknowledged the importance of Mark’s involvement in the campaign saying his presence will add value to the bid.
“we also enjoin our brother who has walked this road before and has built the necessary bridges to enable Benue cross over to El – Dorado, Sen. David Mark to lead us as a united Benue to keep this age long tradition of passing – to – a – brother. It is imperative that at this auspicious time where his silence means so much, we expect that he takes a definite stance just as he is not known to be one who sits on the fence”.

The group further expressed their desire to shelve all tribal differences and work for the success of Senator George Akume’s senate presidency bid.
“We sincerely wish to use this medium to affirm to Nigerians and the rest of Africa that the bitter tribal discord between the various ethnic components of Benue State has been buried through the concerted efforts of this group in honour of Senator George Akume’s detribalized and nationalistic posture”. It read in part.
According to him Akume’s Senate Presidency will help to bring about rapid development of the north central geopolitical hemisphere by the practical demonstration of Akume’s mass followership cutting across every stratum of the society and the expected collaboration with the incoming administration of the President-elect to deliver on the APC manifesto.
“We wish to throw our total support behind Senator George Akume, which is not only to confirm his ever green political image in the minds of the poor masses of Benue State but to reaffirm our commitment to the unity of purpose that the interest of Benue State must come before the selfish interest of a few minority in the land”. They further acknowledged.
They further noted that they have carefully analyzed the various arguments canvassed in favour of  Akume who is a former Governor of our beloved State and present minority leader of the Senate of the Federal Republic of Nigeria, expressing confidence that Senator George Akume perfectly fits into the various arguments centred on religion, legislative experience, strength of character, goodwill, masses oriented ideology.
” This rare gesture particularly from his party men and women at the All Progressive Congress is a pointer to the fact that Benue’s position in our democratic experience cannot be over emphasized at this point in time”.
“We therefore wish to reiterate our unequivocal stand to drum our support behind his aspirations as rightly viewed by well meaning Nigerians who have without his consent toured and navigated every nook and cranny of the country to rally round behind our dear brother and leader of immense value.

“Nigerians have in no doubt identified some genuine leadership qualities in Senator George Akume to lead this very important arm of government in line with its developmental agenda of ‘CHANGE’ and wish to call on all Benue Sons and daughters irrespective of ethnic bloc in the spirit of true rebirth to continue to pray for this dream to become a reality in our national life and space as a people”. They declared.

Five married men to trek from Nigeria to Mecca for Buhari

Five married men to trek from Nigeria to Mecca for Buhari