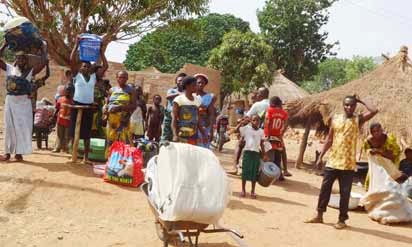 At least, seven persons were feared killed Tuesday morning in a renewed crisis that erupted between suspected Fulani herdsmen and some Tiv farmers in Guma local government area of Benue State.

It was gathered that Fulani mercenaries numbering about 200 stormed Angyom, Tse-Usenda and Tse-Torkula the country home of the paramount ruler of the Tiv nation, killing anything on sight and burning down houses, huts and farmland.

A source told newsmen that, “The herdsmen who were over 200, stormed Tse-Torkula, Angyom and Tse-Usenda settlements at the early hours of Tuesday when everyone was still on bed”

“It was the sporadic gunshots that woke everybody up and we all scampered for safety but as I speak to you, at least, seven person have been killed, while not less than 100 houses have been razed down.
“We have lost several of our farmland, while we are yet to account for over 40 persons who are still missing as a result of the invasion; heavy fight is still raging as i speak to you and the communities have been deserted, but we hope that the missing persons are still alive.”
Guma Local Government council Chairman, Mr. Frank Adi who confirmed the incident to newsmen lamented that his people were becoming refugees in their own state.