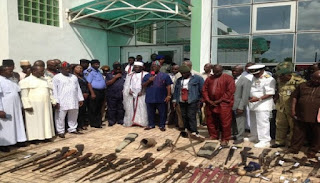 Despite spending millions on amnesty in Benue State, criminals still rule over the land, IDOMA VOICE can report.

This is just as four suspected kidnappers have been nabbed in the state.

Recall that during his inaguration last year,  Ortom had declared amnesty for possessors of illegal arms in the state, urging them to surrender their weapons or get arrested.

“We call on all unlawfully armed persons who have been terrorizing innocent citizens to immediately surrender their arms, be free and get integrated into our reform program, or we shall pursue them down to their holes,” he stressed.

The Special Assistant to the governor of Public Administration,  Gurgur Japhet said the hoodlums were said to be arrested by policemen on duty at a  checkpoint in Makurdi, on Thursday, July 28, 2016.
According to him, the men who were covered with charms and assorted weapons, were heading towards Wadata Area of Makurdi but were unlucky, as they were stuck in the heavy traffic congestion that was witnessed in Makurdi as a result of the burial of the late Bishop Emeritus, Atule Usuh.


He said, “On reaching the police checkpoint, their driver attempted to speed past but miraculously, the vehicle engine off right in front of the police.
“Four of the daredevils attempted to run out from the golf voxwagen car but the police arrested them. They were looking like babalawos, covered with charms.
”When the vehicle was searched, behold, heavily loaded sniper riffles were discovered,” Gurgur added.
The 4 suspects are reportedly cooling their heels presently in police custody.