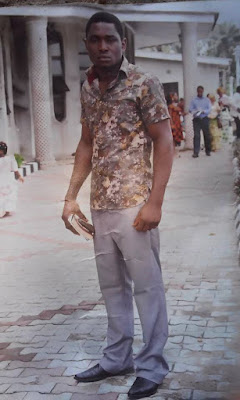 A Benue son, simply identified as Simeon, who based in Port Harcourt, the Rivers State capital has been declared missing.

It was gathered that the young man, a native of Mbatyav village in Gboko LGA, believed to be in his late 20s left home before 2014 Easter but has not returned ever since.
His visibly worried kinsman, Lubem Bokyaa, who raised this alarm, said his family is worried over his sibling’s sudden disappearance in the oil rich city and are threatening to take legal action against him since the victim was living with him.
Speaking with IDOMA VOICE on phone, Bokyaa said, “this brother named Simoen has been living with me. He left home a week before Easter in 2014 and has not been seen neit her heard from.
“He told me that he wanted to relocate to Lgos to meet his elder brother who is an Immigration officer a probably jet out to Italy afterward. I have taken my mind off him until the family started making trouble with me to provide him or risk going to jail. When I called the brother he claimed Simeon didn’t come to his house.
“His family is now threatening to involve the police if the young man is not seen before the week runoff since he lives with me before his final disappearance.
“He is dark in complexion, speaks English, Tiv and Hausa languages fluently. Anyone with useful information should please contact me or the nearest police station,” he pleaded.

Important things you need to know about the Founder of Peace Corps of Nigeria, Dickson Akoh

Important things you need to know about the Founder of Peace Corps of Nigeria, Dickson Akoh